Commemorative Medal for the Defence of Slovakia (Slovakia) 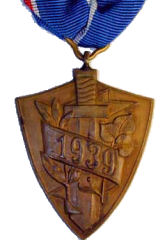 Bars could be added to the ribbon and the below are known to have existed:
* Javorina