On 9 June 44 Red Army launched its 4th strategic offensive on Karelian Isthmus. 260 000 men and over 600 tanks and assault guns smashed Finnish defensive line and advanced towards Finland, while Finnish troops desperately tried to slow them down and buy time that reinforcements from others theatres could arrive.

Finnish Army anti-tank capability had not been progressed much during 2.5 years of trench war period. Equipment was obsolete and Panzerschrecks and Panzerfausts received from Germany were stored to rear-echelons and kept in secret. Red Army tank tactics and equipment had been much improved during heavy fighting with Germans. 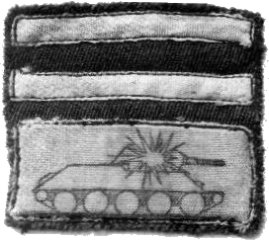 This badge with 2 stripes belonged to 1st Lieutenant Gregotius Ekholm, CO of Jaeger Company/3rd Brigade.
He destroyed 7 tanks with Panzerschreck. He was awarded with Knight of Mannerheim Cross.

While heavy fights raged on the front, all available means were taken to bolster anti-tank capability. One of those was tank destruction badge. Finnish General HQ published 28 June 44 this order:

To raise skillful and brave tank destroyers and bolter their spirits to new feats in their demanding task, Field Marshal had desited that they will be given special badge for tank destruction.

Following regulations are followed when badge is given:

1. Badge for tank destruction is awarded to man who destroys tank with close quarter weapons or while acting as gunner to a gun.
Destruction of a tank with closequarter weapon can be happened for example shooting (example Panzerschreck, Panzerfaust, anti-tank rifle grenate), by throwing (example anti-tank handgrenate, satschelcharge, anti-tank mine), pulling or pushing (example slide mines), by placing an explosive to tank or by others similar actions but mines and others similar actions, which don't require immediate contact to enemy are not accepted as base for award.
2. Five classes of award are issued:
1 tank destroyed-one wide stripe with figure.
3 tanks destroyed-above figure stripe one narrow stripe without figure.
5 tanks destroyed-above figure stripe two narrow stripes without figure.
10 tanks destroyed-above figure stripe three narrow stripes without figure.
15 tanks destroyed-above figure stripe four narrow stripes without figure.
Wide stripe with figure is 7x3 cm white stripe with dark tank figure.
Wide stripe is sewed to right sleeve so that upper corner is 10cm below elbowseam, badge in the middle and narrow stripes above it with 0.5 cm distances.
Narrow stripes are 7x0.5 cm and white.
3. Those who should be rewarded with badge are nominated by Company CO with retroactive from 1.6.44.
4. Award is given by Divisional CO.
5. When a award is given, it should be noted to military pass.
6. Awards are supplied for temporary by General HQs training department, who will send them to units, when badges are made.


Idea for tank destruction badge was most likely came from German Panzervernichtungsabzeichen. But when German award was given only for tank destroyed with hand held weapon, Finnish badge was given to gunners of tank/assault gun or gunner of anti-tank gun.
Special attention was required, that the tank was really destroyed, before award was given. CO of Armoured Division Generalmajor Lagus required that enemy tank should burn or explode before he gave award. It is also interesting to note that while the Germans used a German (!) tank (a Panzer IV) to symbolize a destroyed enemy tank, the Finns used a Soviet T-34 tank. 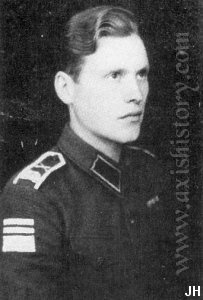 Highest number of tanks destroyed with handheld weapons had Lance Corporal Ville Väisänen from 2nd Borderjaeger Battalion. He destroyed 8 tanks with Panzerfaust in one day. Later on same day he became MIA. Private Eero Seppänen destroyed 7 tanks with Panzerschreck.He was from 49th IR.

Generalmajor Lagus suggested to General HQ 14 Aug 1944, that in his Armoured Division also drivers and commanders of tanks/assault guns should get badges. He noted that in assault guns close team effort of gunner, driver and commander was required to achieve results. 27 Aug 1944 General HQ rejected his request and noted that only who was directly responsible of destruction of enemy tank will get award. Also they wanted award no more badges than enemy tanks were destroyed. 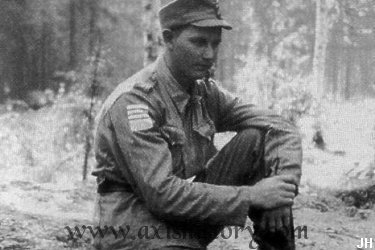 At the closing stages of war, there were plans to replace fabric badge with metal one, so it would be more durable and easily changed to another uniform, but plans were forgotten when war ended .In front lines wearing of badge was sometimes discouraged, because they could expect no mercy from Russian tankers if they should became POW.

In heavy battles during summer 44, 950 Russian tanks were destroyed by Finns. Of those 612 were destroyed by Army (Armoured Division and Infantry formations). Majority of tanks destroyed by army were credited to men operating Panzerschrecks and Panzerfausts. They were proud carriers of Finnish tank destruction badge.