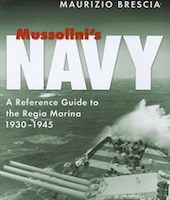 Mussolini's Navy: A Reference Guide to the Regia Marina 1930-1945
by Maurizio Brescia

Of all the major naval powers of World War 2, it can be strongly argued that the Italian Navy (Regia Mariana) has had the least exposure in the English language. Maybe this lack of exposure is a remnant and testimony to the effectiveness of the Allied propaganda of the period, and the more recent invention of the internet, where all things Italian were seen as having 1 forward gear and 5 reverse gears, and where these myths & propaganda found a new home & audience. For those not fortunate to have access the Italian USMM, Revista Marratima or Storia Militare, then the works of Bragadin, O’Hara, Sadkovich, Greene & Massignani have been welcomed in helping rectify this imbalance over the years.

This latest work by the renowned Italian author Dr Maurizio Brescia is a work of authority and clarity. As a reference guide you will not find exhaustive descriptions concerning specific actions or battles, but something akin to the works of M.J.Whitley , though much more detailed. The sheer range of the book is a masterful balance and for which the author deserves due credit.

The book is broken down into some 10 chapters, though by far the largest is the 131pages of the fourth chapter, called Ships in Service 1940-5. Though in fact where necessary he goes on and charts the life of these vessels post 1945. The book is lavishly filled with photographs from the usual suspects to those concerning gun emplacement being constructed above Genoa, smoke generators on train wagons, to that of the armoured train firing during a drill. I personally found Chapter 2 on Dockyards, Naval Bases, Ports, Shipyards and Coastal Defences most enthralling. Its scant 11pages left you with a myriad of questions about a range of issues that none of the other English language tomes even come close to discussing or answering. Other chapters detail areas such as pre 1939 history, Fleet Organisation/Operations, Assault Craft, Naval Aviation, Naval Camouflage, Flags, Uniforms and a Who’s Who of the Italian Navy.

Buy the book using the links below and you help support the site:
Amazon.com - Amazon.co.uk - Amazon.de