Review: The Hungarian Army and its military leadership in World War II 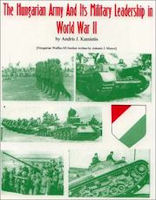 This oversized book is divided in two separate sections, one presenting military commanders and one that covers Hungarian Waffen-SS.

The first section includes four parts: I) Hungary between the Wars, II) The entry of Hungary into the war, III) The end of admiral Horthy´s regency, and the most extensive part, IV) Hungary´s military leadership in World War Two.
Parts I-III provides a very brief background for Hungary´s way into the Axis pact, the actions taken by Hungarian troops on the eastern front and the fall of Horthy. Despite the headings of parts I-II, there is much focus on the evolution of the Hungarian army and the reader is presented order of battles and details of army movements on the eastern front. Surprisingly there is no map in part II that covers the Hungarian actions in the east and this has a negative impact on the understanding of the text. Despite this flaw I found the chapters easy to read and informative. Part III is also focused on the army and deals with its last battles and final faith.

Part IV provides biographical details of the top military commanders of the Royal Hungarian Armed forces. Even though admiral Horthy was not a serving officer during the war his role of regent and Supreme C-i-C makes it self-evident to include him. Beside Horthy part III covers six Commanders in Chief, seven Deputy Commanders in Chief, two Ministers of Defence, nine Army Commanders and six other Senior Generals. Frankly speaking part III became quite boring to read only after a few pages, but how fascinating can it be to read biographical details? No, this part should be regarded as great reference material.

Section two of this book covers the history of the Hungarian Waffen-SS. Since I had little knowledge on this subject I read it with big expectations. Again, the reader is presented facts on a detailed level and provided information about organization of regiments and divisions, and their actions. This section contains many maps, some photos and schematic illustrations in black and white. Unfortunately some of the maps are of poor quality and are difficult to follow.
This book demands some kind of basic knowledge but all in all I recommend it to everybody who wants to get deeper knowledge of the Hungarian military leadership during World War Two and Hungarian Waffen-SS. Despite my objections this book contains much information and should be used as reference material.

Buy the book using the links below and you help support the site:
Amazon.com - Amazon.co.uk - Amazon.de