Awarded to Indian volunteers fighting with the Germans.

This was not a German award, it was awarded by the Free India Movement, Azad Hind, led by Subhas Chandra Bose who supported both the German (Legion Freies Indien) and Japanese forces. 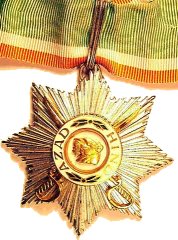