The NSDAP, SS, and all three branches of the Wehrmacht all had their own white summer tunics.

The Heer in fact had two: the alterer Art Reichswehr style, with stand collar and six buttons, which Topp is wearing in the photo, and the newer model with laydown collar, eight buttons and French cuffs as worn by his friends. At some point (1943?), wearing the collar unbuttoned with a tie was permitted.
The white tunics of the Heer could be worn by between 1 April and 30 September for walking out, with the "small" mess dress on certain occasions and for sporting events, tournaments and races.

The Luftwaffe jacket was identical in cut to the Tuchrock, four-button with roll collar and lapels. It was worn between 1 April and 30 September as a summer uniform but was also permitted to be worn outside of this period for office duty and within closed military installations, but only with grey-blue trousers and without collar patches.

The Kriegsmarine jacket was very similar to the one worn by the Luftwaffe and was worn in hot climates as part of tropical service dress.

The SS (briefly) authorised the white summer jacket; this was cut the same as the black service tunic, with SS angled slash lower pockets and single shoulderboard.

NSDAP party officials had both single- and double-breasted white uniforms; they could be worn with either white or black trousers. 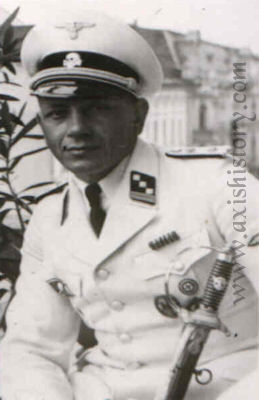