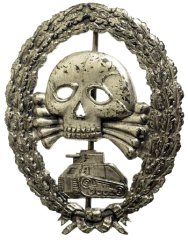 Awarded to soldiers of the panzertruppen during the Spanish Civil War

A special badge in gold was awarded to Obest von Thoma by soldiers of his armored group.