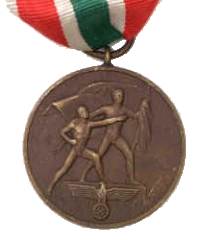 Participation in the annexation of Memel (23 March 1939)