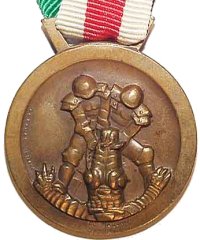 This Italian award was awarded only to members of the German Africa Korps.

It was designed by De Marchis.