Sea Battle Badge of the Luftwaffe 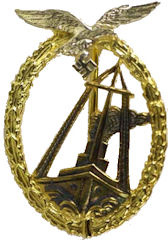 This badge was instituted but not awarded.