Honor Goblet of the Luftwaffe 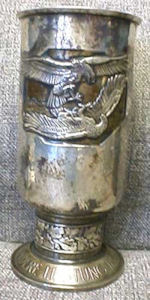 Awarded to air-crew members who had received the Iron Cross 1st Class but not the German Cross or Knight's Cross.

It was also known as the Ehrenpokal für besondere Leistung im Luftkrieg (Honor Goblet for Special Achievement in the Air War).

The first recipient was Major Johann Schalk.
On 10 December 1944 awarding of the goblet was stopped.

The recipients of the goblets were allowed to wear the Luftwaffe Honor Roll Clasp.

A similar goblet was awarded during the First World War the Ehrenbecher für Sieger im Luftkampf (Honor Goblet for the Victor in Air Combat).

Photo courtesy of Relics of the Reich

Christopher Ailsby - A collectors guide to the Luftwaffe
Richard Long - The Reichsmarschall honors his own: The bravest of the brave (in The Military Advisor, Vol 20 No 3)