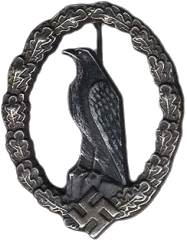 Awarded to former flying personnel (4 years of service for regular airmen and World War I veterans, 15 years for others)

It could also be awarded to next-of-kin for personnel killed in the line of duty.

In some sources listed as the Luftwaffe Retired Pilots Badge.