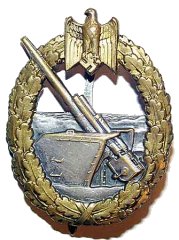 For a crew:
* Receiving 8 points (2 points for destroying an enemy plane without support, 1 point with support and 0,5 points for aiding in the downing of aircraft)