Knight's Cross of the Iron Cross with Golden Oak Leaves, Swords and Diamonds 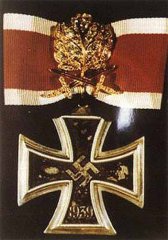 * Awarded the Knight's Cross with Oak Leaves, Swords and Diamonds
* Repeated acts of bravery above and beyond the call of duty (or a single act if it was of great importance)

This award was to be presented to the twelve most deserving germans after the war had been won by the Axis nations. Only one exception was made (the Stuka ace Hans-Ulrich Rudel) and this was to be the only one presented.