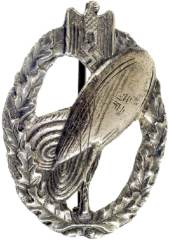 Awarded to ballon observers (balloons were used for artillery spotting on the Eastern front) on a point basis.
It was awarded in three classes: Bronze, Silver and Gold

There is a lot of controversy regarding if this award was awarded during the war or not. See Army Balloon Observer's Badge: A Comprehensive Study for more information