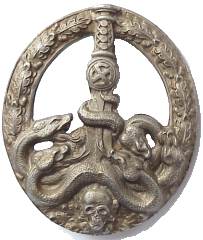 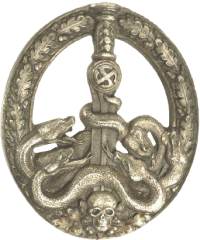 The BKA, dritte Stufe (Gold), was officially awarded at least 10 times to members of the 24. Waffen-Gebirgs (Karstjäger)-Division der SS on two occasions. The first award ceremony was held by Reichsführer-SS Heinrich Himmler on 15 Feb 1945 (4 recipients); the second award ceremony was held by Generaloberst Guderian on 10 March 1945 (6 recipients).
Quite probably further badges, of all grades, were awarded to Karstjäger members as well as to other unit's members, which is not known or confirmed at this time.

Holders of the Anti-Partisan Badge 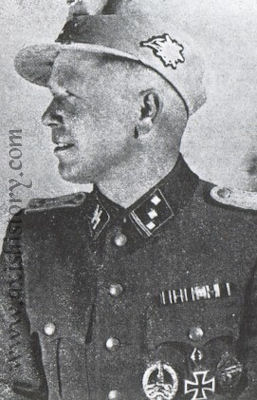 (Courtesy of Karl B)

It is stated often that a variant of gilded silver with diamonds was produced by C.E.Juncker, Berlin at the end of 1944 on order of Reichsführer-SS Heinrich Himmler. Some sources are stating 10 pieces, according to other sources the number was 20. There is no confirmed bestowal known with this special grade. The whereabouts of these pieces - if ever existing - is unsettled.
The common thought about the diamonds variant is that it most probably has to be regarded as a fake. At least there's no proof whatsoever of it's real production.

Although the badge was awarded for anti-partisan actions, the word "Partisan" wasn't choosen to name the award and wasn't even used in the context of this kind of warfare. The reason for this is the absolute positive meaning of the word "Partisan" in the usage of Russian language. Therefore Reichsführer-SS Heinrich Himmler in autumn 1942 ordered as a rule of language to use the word "Banden" [banditry] to name the guerilla war.

It is sometimes referred to as the Combat Badge of the Waffen SS and Police (Kampfabzeichen der Waffen SS und Polizei).

Photo courtesy of Relics of the Reich