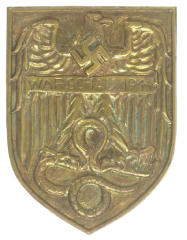 Taken part in the crushing of the Warsaw Uprising August-October 1944 and either:
1. Served honorably in the fighting,
2. Engaged in seven days of close fighting,
3. Being wounded during the fighting,
4. Spent 28 days in the vicinity supporting the battle or
5. Luftwaffe personnel who took part in missions in support.

This shield was put into production but the production dies were destroyed by an Allied air raid and none were presented.

It was designed by Benno von Arent.