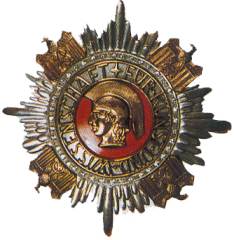 It was to be awarded annually to deserving Germans in the fields of art of science.

It was instituted as a German "Nobel Prize" since Adolf Hitler was furious that the Nobel Peace Prize 1935 was awarded to the German pacifist writer, Carl von Ossietzky, and had forbidden German citizens to accept it.

It was designed by Müller-Erfurt.