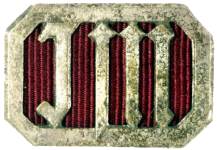 Being a member of Jungmädel and passing a series of test which included sport, homecraft and political theory.