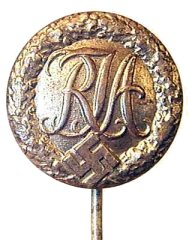 Awarded to boys and girls below the age of 18 who passade a set of physical tests which included running, swimming and marching.

This award was discontinued 1942.