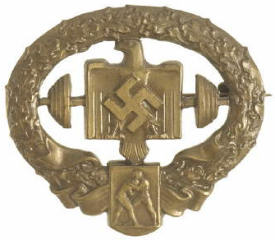 Successful competing in heavy athletics (such as boxing and weight lifting).