Honour Badge of the TeNo 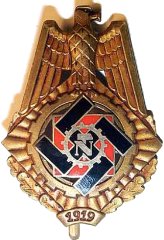 The year of entry in the TeNo was marked on the badge.