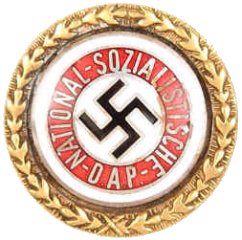 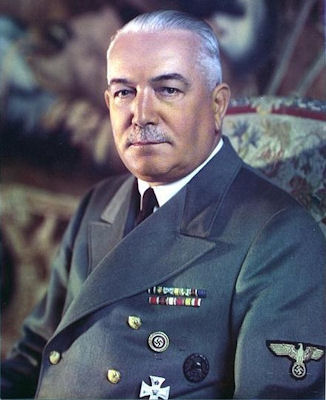 The first honorary awards of the Golden Party Badge to members of the Wehrmacht was made on 30 January 1937 to four top commanders: Generalfeldmarschall Werner von Blomberg, Generaladmiral Erich Raeder, Generaloberst Werner von Fritsch and General der Flieger Erhard Milch.
The next honorary awards to senior active-duty commanders were made on 20 March 1939 to Wilhelm Keitel and Werner von Brauchitsch, both Generalfeldmarschall. Generalleutnant Karl Bodenschatz received it in 1940 and no one was awarded to senior commanders in 1941 and 1942. On 30 January 1943 eight Wehrmacht commanders was awarded it, Generaloberst Eduard Dietl, General der Artillerie Alfred Jodl, Ministerialdirigent Hermann Passe, General der Infanterie Hermann Reinecke, Generalleutnant Julius Ringel, Generalmajor Rudolf Schmundt, General der Gebirgstruppen Ferdinand Schörner and Generalmajor Adolf Sinzinger.
On 30 January 1944 Grossadmiral Karl Dönitz received the award and on 19 September 1944 Generaloberst Dr. Lothar Rendulic received the award.
The last award to a Wehrmacht commander was made on 30 January 1945 to Generaloberst Robert Ritter von Greim.
The first four men were also made members of the NSDAP at the same time, those who received it later were not made members so this requirement was apparently lifted at some point between the awarding in 1937 and the one in 1939.