This division was engaged in 1939 between the Mosel and the Sarre rivers. In 40, Renforced it attacked throught Luxembourg to Longwy. then it fought in France at Guignicourt, crossed the river Marne near Reims, then to the river Loire. it was engaged in Russia on september 22, 1941 as first echelon on the Bug. Cholm (42), Orel (43), Briansk (43), Karkhov (43), Tcherkassy (44), Italia (44-45).
The badge was introduced during summer 44 . It represents the "Mosel triangle" where was formed the division. It is in brass (21mm x 16mm) the painted parts are hollowseparated by a small thread. It was affixed on the pocked by a soldered pin. the manufacturing is well done , so we can think that it was manufactured by a local artisan in 44. It was at least distributed to the AA 34 and IR107. 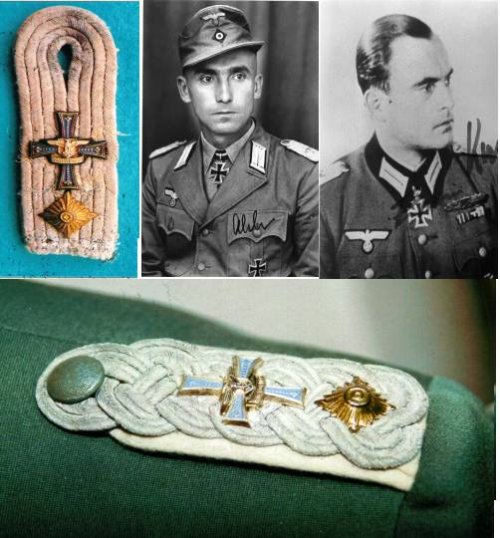 This division was formed in 43 in Sardaigna, corsica and Elbe island, and took the number of the 90 Leichte Afrika Div (dislocated in tunisia few month early). It fought successively in Cassino, Rome, Florence, Rimini, Bologne then in France.
The "Sardinienschild" represents a stylized Sardaigna island crossed by a sword. It 's in brass, localy made. 2.6mm x 1.6mm
It was worn on the left side of the cap.
It seems that another badge existed for that division; a "Springender Reiter".

Formed in 1944, parted of the 16 PzD, it fought in France in Normandie. Then after a reorganisation it was engaged near Cologne. It participated to Ardennes offensive where it suffered heavy losses. it end the war encircled in the Ruhr pocket.
The badge was instituted during summer 43. it represents the tactical symbol of the division, the "windhund". it's in pot grey metal with a black or dark green painted bottom. it's fixed with 2 prongs. 2.8cm x 2cm .
The models with 2 holes are considered as post war copies.

It was formed on february 40 in the Hambourg vicinity, and engaged in may on the west front. it fought on the Aisne canal. It fought as follow on forces during Barbarossa. It took part of heavy combats in the Demjansk chauldron in 41-42. Then it settled in the Ladoga lake sector where a third of its soldiers died or were wounded. In 44 it fought in Courland where it was encircled again.
The traditional badge was created in 44 and its a reproduction of the tactical sign of the division, a sword . It has been manufactured in brass or with cartridges. 30mm x 10mm. it was worn on the cap left side or on the left pocket. 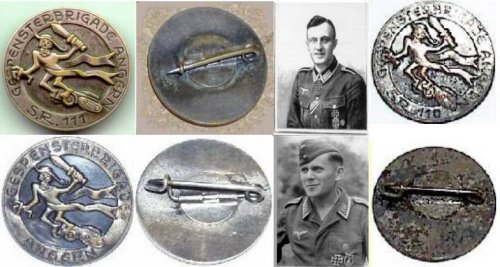 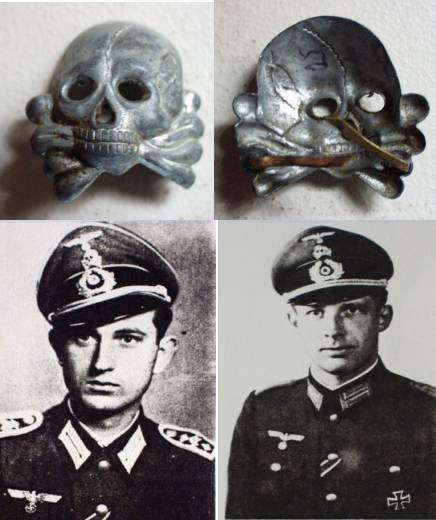 This variant of the Totenkopf (Death's head) was originally worn by the Prussian 1st and 2nd Bodyguard Hussars and the tradition was passed on to the 5. Reiter-Regiment in 1921. 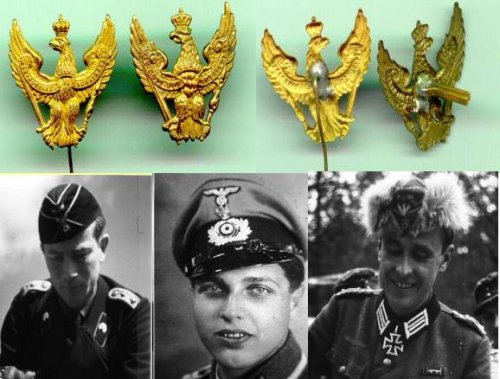 The Schwedter Adler (also known as the Dragoon Eagle) was originally worn by the old "Brandenburger Dragoner", (1st Brandenburg Dragoon Regiment Nr. 2) and the tradition was passed on to the 6. Reiter-Regiment in 1921.