The Eagle Shield of Germany

The origin of the Adlerschild des Deutches Reich's came about after the unrest and political reform within Germany following World War One. The turmoil within a defeated Germany in 1919 led to all kinds of unrest, the end result being the creation of the German republic. Before and during the war the various Germanic units and states had had their own awards and decorations, which [apart form the Iron Cross] were particular to their own troops and populations, there was no truly national German award. It was decided to offer a contract for a design for a national award to selected designers and artists for the creation of an award that would be a high national decoration of the republic to recognise outstanding life achievement.

The Eagle Shield of Germany was a brand new award which was introduced by the Weimar Government on 15th November 1922. This was to be the first among a number of national honours later to be introduced following the prohibition of portable medals and honours of the German states following the end of World War One. [It was also forbidden for Germans to accept the honours and awards of foreign governments.] The Weimar government wished to break with some of the old 'pomp' and traditions of the former Imperial German states and create it's own national identity, highlighting the inherent strength of the German nation recovering in the aftermath of World War One.

The Office of the Reichskunstwart was involved in the design of the award and sent out tenders in 1921.After the design and selection process they issued a press statement regarding the form of this new honour award. This detailed the reason behind the award and the new design of the Reichsadler. It gave the following observations; "The simplification of the eagle design relates to the shaping of the plumage, the tighter lines of the body neck and head. The design is produced in a strong relief which means this can be adapted to be suitable for the production of coinage because it is close to the edges of the borders and the relief height of the design means the technical achievements needed can be met." It was the winning design of Josef Wackerle who completed it in 1921 in response to the brief from the Treasury. The shield was 108m.m. across and made of cast bronze with a base plinth and special personal inscription on the reverse as well as the name of the recipient. On the obverse was the design of the Reichsadler. Apparently it came in a leather presentation case. This was the first appearance of the new Reichsadler on an award and the design became a model for other medals and awards manufacturers.

During the time of the Weimar government the presentation awards had different styles of lettering and design incorporated into the reverse, making the award of a more personal nature. Some of the shield reverses are quite artistic in comparison to the later standardised Third Reich examples. The pictures below serve to illustrate this variety of design:

The Ministry of the Interior had the responsibility for processing the nominations for the award on behalf of the Reichsprasident. Ebert made the first award of the Adlerschild to Gerhart Hauptmann on the occasion of his 60th birthday. This became the highest honour award of the Republic. It was usually accompanied in the Weimar period by a hand written letter from the President and was awarded to figures from the worlds of Science, Art and Culture or the Economy. Generally it was given to those who had reached 70 or 75 years of age.

There are very, very few of these awards remaining in the aftermath of World War Two, it is supposed that since the end of the war they have become lost or destroyed. 19 of these awards were made by the Weimar Republic and the complete list of recipients is below. There was a further development of this award after the 1933 elections and the National Socialist German Workers Party came into power. The shield's design was altered by the adaptation of the 'new' updated Reichsadler which incorporated the swastika. The shield was presented up to and during the war years to similar important figures. There were a further 38 presentations before the end of 1944 where records cease due to the war situation and as with the earlier Weimar design, are considered extremely rare. 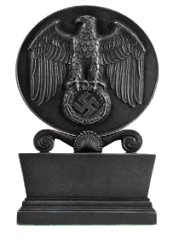 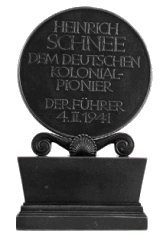 The award pictured is one of those restyled by the the NSDAP after coming to power in 1933. This means that the eagle was re-designed to include the swastika wreath as a symbol of both the state and the government. The shield was presented where possible personally by Hitler. The pictured shield was awarded on the 4th February 1941 to the German Colonial Pioneer Heinrich Schnee. The scarcity of these awards, as previously mentioned, is such that the author has not been able to source a picture of the original Weimar period disc and is not aware of one coming onto the market in recent years. The author would be grateful to any reader with any additional information on this non portable award.

The author has reproduced this list of the recipients of the award and would like to acknowledge the work of Wolfgang Steguweit whose work printed in a German magazine a number of years ago was of considerable help in compiling this article. Grateful thanks also to Bill Stump for some additional facts and pictures supplied and also information via the world wide web including Marcus Wendel's own Axis History Forum found at :- http://forum.axishistory.com

If anyone has any further information on this award or of surviving awards the author would be grateful to receive it.

List of recipients of the Third Reich Eagle Shield

Where there are words included in capitals, these are the words which appear on the reverse of the Shield as the dedication below the recipients name. Apologies for the somewhat literal translation of the wording.

As I have already mentioned above, the translation of the inscription is quite literal and some meanings and words do not easily work. And errors are therefore my responsibility. I would be interested to hear from anyone with additional information.

Footnote. It is also possible that there were two further recipients and I have received correspondence regarding this from the Deutsches Museum. The names of these ‘possibles’ are:

Erwin Guido Kolbenheyer – my research leads me to think he may have received it for his contributions to literature and drama. However, he does not fit the age criteria of the original award and was not on the lists I had seen previously. He received several other awards of this time period. One university biography lists him as receiving the following:

Wilhelm Kreis – Architect who was responsible for design of monuments and memorials for war dead, nominally under the direction of Speer but working for the German government. He also designed and built the main station in Meissen and the German Hygiene Museum in Dresden and planned the Gau Forum in Dresden, which was not built due to the outcome of the war. Possible recipient in 1942, unconfirmed.