The plans of founding an armoured group in the Finnish armed forces were confirmed on 28th June 1942 which resulted in the founding of the Panssaridivisioona. Although the official divisional history starts in 1942 the first divisional units started their operations in the start of the Continuation War in 1941.

1941 – When the invasion of the USSR began the 1st Jääkäri/Jäger Brigade and the Armoured Battalion (which were both used as a backbone for building the Panssaridivisioona in 1942) formed the Reinforced Jäger Brigade under the command of Jäger Colonel Ernst Ruben Lagus (who later became the first soldier to become a Knight of the Mannerheim Cross). The unit was a part of the Ilves (= Lynx) Division on 5th July 1941. The Armoured Battalion, however, did not engage in the first phase of the battle with the 1st Jäger Brigade. After a couple of days into the operations Colonel Lagus received the whole of the Ilves Division (5th Division) under his command, and the Reinforced 1st Jäger Brigade came under the command of Jäger Lieutenant-Colonel Väinö Merikallio (the former commander of the Jäger Battalion 4). After Tuulosjoki river was reached, the command structure was reorganised and the Detachment Lagus was founded on 25th July 1941. It included the Armoured Battalion with Lieutenant Colonel Sven Björkman as its Commander. A new phase in the offensive began from Tuulosjoki on 4th September 1941 when the unit pushed from the Tuulosjoki river to river Syväri (Svir) river between lakes Onega and Ladoga. From the Svir it attacked northwards to the city of Äänislinna (Petroskoi on the western shore of Lake Onega). On 9th November most of the tank Battalion continued the attack northwards from Petroskoi to Karhumäki and Poventsa (northern tip of Lake Onega) which they took on 4th - 5th December 1941. While most of the Battalion attacked towards Karhumäki one Tank Company was left behind at Svir and participated in fighting in eastern shore of the river in the vicinity of the Lobskaja and Gora villages. After the taking of Karhumäki and Poventsa the Armoured Battalion was transffered into reserve (around the Äänislinna/Petroskoi area).

1942 – The Tank Battalion was enlarged as a Tank Brigade (consisting of two Battalions) with the order given on 10th February 1942. Some five days later, on 15th February 1942, the order for the establishment of an Assault Gun Battalion of the Armour Brigade was given. The Gun Company of the 1st Jäger Brigade was added to the Panzer Jäger Battalion on 30th June 1942 and renamed as 7th Gun Company. This made the battalion four gun companies strong. The battalion’s HQ Platoon was enlargened to a HQ Company. On 28th June 1942 the Panssaridivisioona, nicknamed Marskin Nyrkki - The Fist of the Marshal, was born. The last unit to be established was Täydennysjääkäripataljoona (Replacement Jäger Battalion) on 26th October 1942. The division spent most of the year 1942 in reserve.

1943 - In the spring time the unit came in reserve on the Aunus front. At that time the Russians staged an attack along the Svir river but were forced back. The Finns managed to recover some T-34 and two KV-1 tanks, which were added to the Panssaridivisioona. During June and July 1943 the division was live-fire testing the new BT-42 assault guns, which proved effective against pillboxes and other static positions, in the river Svir area. The Jäger Battalions of the division were operationg mainly in the northern and western parts of the lake Lake Onega at that time.

The equipment given to the division was of mixed origin. It consisted mainly of German and Soviet made vehicles although many more could be found.
- The anti-tank gun companies of the Panzerjäger Battalion used A-20 Komsomolets for towing their guns and were the first unit to get the 50 PstK/38 [50mm Pak 38] guns in 1942. In 1943 they also got some 75 PstK/40 [75mm Pak 40] AT-guns, although some of their anti-tank companies kept using the 50mm AT-guns until end of the war. Towing vehicles used for towing the guns early on were the mainly captured Soviet made Ford AA and US made (6-wheeled) International trucks.
- The Tank Brigade had around 80 T-26 and 8 T-28 tanks appart from 7 T-34 tanks (4 captured from 1941-1943 and 3 bought from Germany in 1944) and 2 KV-1 tanks. On 1st June 1943 Mannerheim requested 50 T-34 tanks but none were available. By 1944 Germany delivered a total of 59 StuG IIIs and provided training for their crews. Bacause of Hitler’s order of 19th April 1944 the shipment of 15 Panzer IV Js was delayed.
- The Armoured AA Battery had 6 Landsverk anti-aircraft self-propellered 40mm bofors guns and ITPSV 40 (2 per platoon)
- Heavy Artillery Battalion 14, which was the organic artillery-part of Panssaridivisioona had 12 150 H 40 [15 cm sFH 18] howitzers, which were towed with 7-ton McGormick TD-14 bulldozers.
- On 7 th December 1943 the Assault Gun Battalion transferred its BT-42's to a Seperate Armour Company (Seperate Assault Gun Company) and received StuG IIIs. The Company was commanded by Lieutenant Stig Sippel and had 11 BT-42s (in 3 platoons with 3 BT-42s and two vehicles for Leader and Command Squad).
- Armoured Signal Company had 4 T-37 and T-38

1944 – After over a year on the Aunus Front the Panssaridivisioona was moved to the Viipuri plateau on 13th February 1944. On 9th June 1944 the Russians staged their offensive in the Karelian Isthmus. The division moved against the Soviet armour on 12th June1944 with its assault guns claiming 29 soviet tanks destroyed (at that time the Assault Gun Battalion was 23 StuG IIIG strong). Lieutenant Stig Sippel was killed in action at Viipuri on 20th June1944 and the Seperate Armour Company was suspended on 7th July 1944, after loosing most of it’s BT-42 guns. The division participated in the battles of Kuuterselkä, Tali-Ihantala, Vuosalmi and Tienhaara (north-west just outside city of Viipur/Viborg). Because of its training the division proved to be well coordinated in the use of Armour and Jäger units, despite that the always emphasized concentrated use of armoured troops never materialized. The Jäger Battalions had the most decisive effect on the outcome of the battles they fought. After Finland ceased hostilities with the Soviet Union the Jäger Battalions continued their operations in the Lapland War. The Tank Brigade saw little action due to the terrain, which proved to be more or less inpassable. Due to the Soviet demands the Finns had to demobilise, so all reservists still serving had to be sent home. The Panssaridivisioona was officially disbanded on 30th December 1944.

A special medal was awarded to those who served in this unit, the Armoured Division Cross. 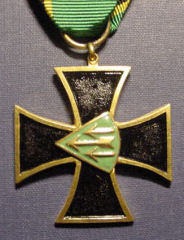 T-26C during Niinisalo tank training in 1944 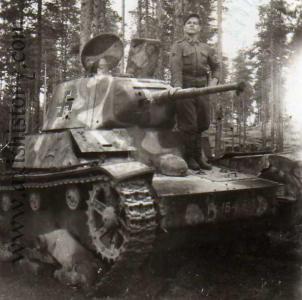 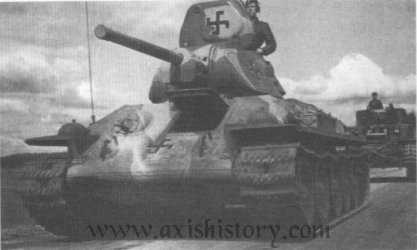 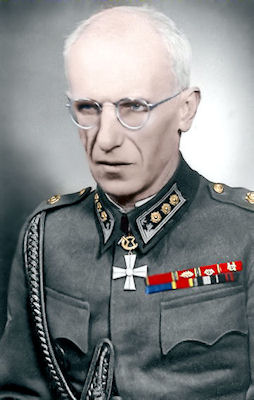 1. Equipped with Landsverk Anti II, all vehicles had skull and bones markings.