A tale of a gun

Today the remaining 12,7cm SK c/34 at the former Norwegian coastal battery at Fjøløy, south-western Norway, looks quite peaceful.
This was not the fact 60 years ago, when the gun was placed at “Marine Küstenbatterie Egersund”, close to one of the most used convoy routes for German shipping.

MKB 4/503 was operational in July 1941, serving under the Marine Artillerieabteilung 503 lead by Kapitän zur See Böhme. The commander of the battery was Kapitänleutnant M.A.Lohse. The battery was first equipped with rather old guns captured on various Norwegian warships in 1940. (2 x 12cm Armstrong L/44 + 1 x 12 cm Nordenfeldt L/44)
The battery had a quiet start, whith only a few passing RAF airplanes looking for German ships. As the situation in Europe started to change, and the British navy started hunting German convoys closer to the Norwegian coast, an urgent need for modernization of the battery was recognized.
By the summer of 1943, the battery received 4 of the modern 12,7cm SK c/34 in M.P.L C/34 guns, which were originally meant for destroyers. As protection against aircraft, 4 new 2cm Flak were brought in. For range finding, a new “Entfernungsmesser 6M by Zeiss was placed on a nearby hilltop. In addition to these weapons, the battery also received 4 60Cm and one 120Cm floodlights, which is unusually much for a coastal battery. As close defense, several machine-gun nests, anti-tank guns and flamethrowers were erected on strategic points.
On 12 November 1944, a German convoy consisting of 4 Merchantmen, “Cournouaille”, “Palermo”, “Greif” and “Rosenberg 1” escorted by M-427, M-446, M-416, UJ-1713, UJ-1221 and UJ-1223 got under attack just south of the battery.
The attacking ships were the 2 British cruisers “Kent” and “Bellona” supported by 4 destroyers “Myngs”, “Varuland”, “Zambesi” and Algonquina”
The British warships fired illumination shells, and after only a few minutes, the merchantmen “Cournouaille” and “Greif” were sunk. The convoy broke up in panic, and the German ships were trying to escape into the nearby fjords. In the chaos which followed, M-416, M-427, UJ-1713 and UJ-1223 were sunk.
As the British ships went further north, they were spotted by the lookout at MKB Stapnes. The battery had been radioed about the attack, and was ready to fire as the ships came closer.
An “ES” (Erkennungssignale) was sent with a request for all ships to identify themselves. When no reply was given, the battery opened fire.
The warships immediately answered by opening fire towards the battery. Several 15 and 21 cm shells exploded in and around the battery area, but only one shell was reported as a “near miss” One of the guns at MKB Egersund was firing flares, while the 3 other fired 61 shells against the fleet. The battery reported several hits on the British ships.
Next morning, Several German minesweepers were patrolling up and down the coast, searching for survivors. Suddenly “out of nowhere” 18 Mosquitos from Royal New Zealander Sqn 489 attacked the ships again. This time, the “FLM529” and “Räumboot 32” were sunk.
At the same time, the AA crew at MKB Stapnes spotted a large formation of heavy bombers approaching at 12000 meters height. Because of the high altitude, the battery opened fire with its 12,7 cm guns, loaded with time fuzed shells. The battery reported 3 downed planes, and 4 possible kills after this attack.

On 12 January 1945, another convoy got under attack in the same area. This time the 2 British cruisers “Bellona” and “Norfolk” supported by the destroyers “Onslaught”, “Onslow” and “Orwell” formed the British force. The German convoy consisted of the merchantmen “Bahia Camarones”, “Wesermarch” and “Charlotte” together with the escort M-456, M-253, M-273, M-436 and the submarine U-427.
“Bahia Camarones”, Charlotte” and M-273 were sunk within minutes, and almost the same scenario happened over again, but this time the British ships were tracked by 2 Würzburg Riese radars. In the following artillery duels between the battery and the British ships, one of the guns at MKB Egersund suffered a malfunction. The outcome of the battle is not found in German documents, as they were probably destroyed.
On the 30 January 1945, “Admiral der Norwegischer Westküste”, Admiral Cilax personally visited the battery. Commander Lohse was promoted and transferred to an operational staff in the OKM. In addition, Cilax awarded 16 EK2, and 130 “Kriegsabzeichen für Marineartillerie” for outstanding service.

After the war, MKB Egersund was closed down by the Norwegian navy, and the guns were transferred to a battery north of Stavanger, where they were operational until 1995. One gun was kept, while the other 3 were given to various museums in Norway
The remaining gun on this photo has production number 373, and was made by “Bochumer Verein” The shield was replaced to make it fit inside the Norwegian casemate. 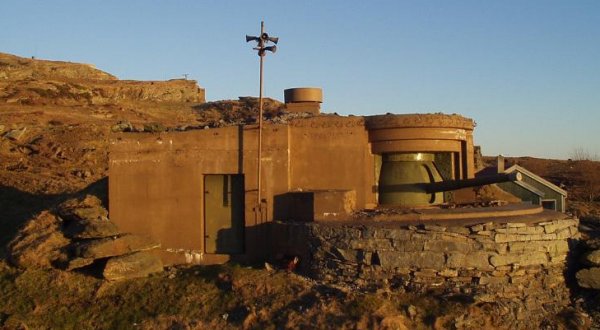 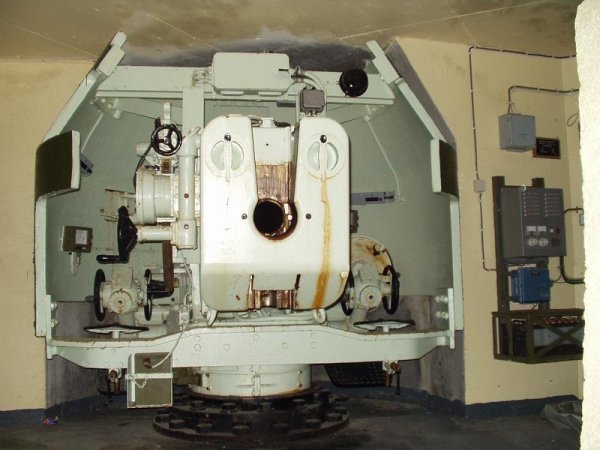