The Blutfahne (Blood Banner or Blood Flag) was the flag of the 5th SA Sturme that was covered in blood from the nazi martyrs (mainly of Andreas Bauriedl who fell on top of the flag (1)) of the failed Beer Hall Putsch 9 November 1923.
Heinrich Trambauer (who carried the flag during the Putsch) took the flag to a friend at Theatinerstrasse 30 where he took the flag from the staff and left with it hidden inside his windjacket. Later Karl Eggers asked Trambauer where the flag was and was given it by Trambauer. Eggers then gave the flag to a man named Gräf for safe keeping. Eggers later took the flag back and possibly left it with a Viktoria Edrich living at Türkenstrasse 23.

After Hitler was released from Landsberg Prison, Eggers gave the flag to him. It was then fitted to a new staff and finial and just below the finial was a silver dedication sleeve which bore the names of three martyrs from the Putsch who had been members of the 6th company: Bauriedl, Heckenberger and von Stransky.

The flag was presented by Hitler to the SA at the Party Rally held at Weimar on 4 July 1926 and was from that time known as the Blutfahne. Hitler used it to consecrated new party colors by touching them with one hand while holding the Blutfahne with the other.

It was presented to the SS (SS-Sturm 1 of 1. SS-Standarte) for safekeeping on 9 November 1926, an indication of the importance of the SS as a small but dedicated and faithful organization in contrast to the SA. Joseph Berchtold, the leader of the SS at the time, selected Trambauer to once again carry the banner, but due to ill health, Trambauer was not always able to carry the Blutfahne. Accordingly Berchtold requested Jacob Grimminger to help and they would be the dual carriers of the Blutfahne. Trambauer received a fractured skull during a street fight with Communists and never recovered, though he lived until 1942, and Grimminger became the sole bearer of the Blutfahne.

Grimminger was a former cabinet-maker who was born 1892 and had served in World War I when he fought on the Western front and in the Middle East. He was awarded both the Iron Cross 2nd Class and the Turkish War Medal (aka Gallipoli Star or Iron Cresent).
He joined the NSDAP and SA in 1922 where quickly became a very active member, taking part in many meetings and fights with the communist, including the "Battle of Coburg" 14-15 October 1922. He was one of the standard bearers in the first Parteitag in Munich 1923, a service he would provide frequently. He later that year took part in the failed Beer Hall Putsch attached to 10th sturm of SA-standarte München. He joined the refounded NSDAP in 1925 and the newly founded SS in 1926 where he began serving as a banner attendant until he was appointed the official bearer of the Blutfahne and made SS-Standartenführer.

SA troops march past Hitler in Nuremberg 1935, with the Blutfanhne in the car and Grimminger to the right of it 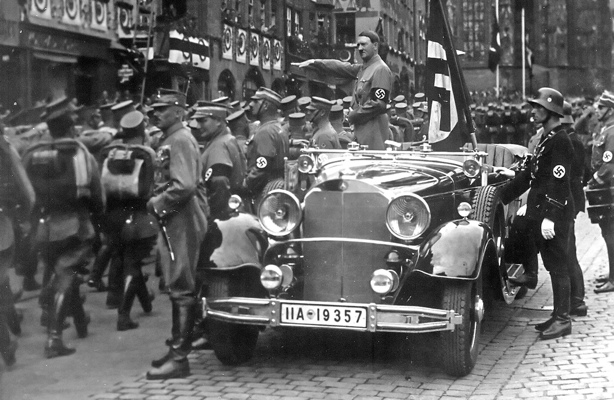 The Blutfahne was last seen in public at the funeral of Adolf Wagner, Gauleiter of München-Oberbayern, in April 1944. It was kept at the headquarters of the NSDAP, the Braunes Haus (Brown House) in Munich, and is believed to have been destroyed during the Allied bombings of Munich.
Jakob Grimminger died poor and completly forgotten in 1969.

(1) Almost everyone thinks that Andreas Bauriedl carried the Blood Flag during the Putsch of November 1923 but that is not correct.
The flag was carried by the 6th company to the Burgerbräukeller then went on the march to the Feldherrnhalle. The leader of the 6th company gave the flag to Heinrich Trambauer to carry. When the shooting started, Trambauer was hit and fell to the ground. Andreas Bauriedl was marching next to him and was shot in the stomach, dying almost instantly, and fell on top of Trambauer's flag.