The Schalburg-Korps was formed on 2 February 1943 as Germansk Korps though it was not organized until July. Unlike the Germanic SS organizations in Norway and the Netherlands, this was not a part of the local Nazi party (Danmarks National Socialistiske Arbejder Parti, DNSAP) but was a separate organization. It absorbed Landstormen, the militia of the Nazi party Nya Danmark in December 1943.
It was renamed Schalburg-Korps soon after its formation (to avoid confusion with III SS Panzerkorps (Germanisches)) in honor of Christian Frederick von Schalburg (former commander of the Freikorps Danmark) who was seen as a hero by the Danish Nazis.

In 1944 the HIPO-korpset was from men of the  Efterretningstjeneste (ET) of the Schalburg-Korps.

Schalburg-Korps was formally disbanded in February 1945.

The Schalburg Cross (Schalburgkors) was awarded to members of the Schalburg-Korps in two classes, on for officers and one for NCOs and enlisted men but the exact requirements are not known. The text around the swastika reads "Troskab vor ære" (Loyalty our honor). It is known to have been awarded once, to a member who had been killed in fighting the Danish resistance.
When the headquarters of the Schalburg-Korps was bombed these awards were either destroyed or ended up in the streets of Copenhagen (and in the pockets of passers-by). 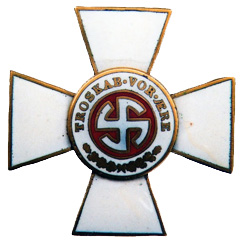 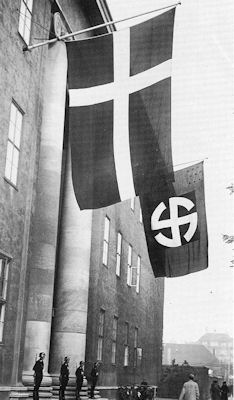