The Landespolizeigruppe General Göring was formed when Landespolizeigruppe Wecke z.b.V. was redesignated on 22 December 1933. It took part in the purge of Ernst Röhm and other enemies of Hitler (mainly leaders of the SA) during the Night of Long Knifes together with Leibstandarte SS Adolf Hitler.
It was redesignated Regiment General Göring on 1 April 1935.

The "L.P.G. General Göring" cuff title was authorized for this unit on 22 December 1933.

Standard of I. Bataillon 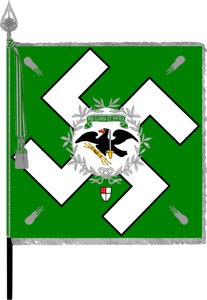