Just two months after its formation on April 10, 1941, the so-called Independent State of Croatia (“NDH” – Nezavisna Država Hrvatska) was forced to consider its first military commitment to its sponsor, ally and protector – Nazi Germany. On 22nd June 1941 Germany initiated “Operation Barbarossa”, the invasion of the Soviet Union, and NDH leader Ante Pavelić called meetings with both the military and civilian leadership of the state in order to gauge support for the invasion. Those present expressed unanimous support for the German attack, considering the German invasion an opportunity to join the battle of "all freedom loving nations against Communism".

Pavelić spoke with Edmund Glaise von Horstenau, the representative of the German military in Croatia, who suggested that he send a communiqué to Hitler offering to provide Croatian troops for the Eastern Front. Pavelić complied, offering to commit Croatian land, air and naval forces, "as soon as possible" to fight alongside their German allies. The ground contingent of the planned Croatian forces was to be the first raised, and the Croatians required around 4,000 volunteers to come forward, enabling them to form a unit of around regimental strength. However, by the July 15th 1941, over 9,000 men had already volunteered, thus causing the criteria for acceptance to immediately be raised considerably.

Consequently, the “Verstärktes Kroatisches Infanterie-Regiment 369”, or 369th Reinforced Croatian Infantry Regiment, began its formation on 16th July 1941. The Regiment comprised around 3,895 officers, NCO's and men, and as the 369th formed part of the Wehrmacht, they were to wear German uniforms and equipment and use German rank insignia. However, the Croat origins of the unit would be clearly identified through the wearing of the Croatian ‘chessboard’ arm shield on the left sleeve, comprising 24 red and white checkers with the title “Hrvatska” (Croatia) above. The 369th also wore the chessboard emblem on the left side of their standard German combat helmet. It is interesting to note, though, that the regiment was considered by the NDH government to also be (at least technically) a part of the Croatian “Domobranstvo” (regular Army).

The Regiment consisted of a regimental staff, 3 infantry battalions, and an artillery staff company. Each infantry battalion had a battalion staff, 3 infantry companies, a machine-gun company, an anti-tank company, a supply company, and an artillery battery. The Regiment was termed "reinforced" because of the attached artillery which was not normally organic in a unit of regimental size. The original commander of the Regiment was Colonel Ivan Markulj (a Croat), who was later replaced by Colonel Viktor Pavičić (also a Croat). Lt-Col. Marko Mesić commanded the artillery section. A Training Battalion for the Regiment was also organized at this time, and was based in the town of Stokerau in Austria shortly after its formation. Its main function was to process replacements for the Regiment fighting on the front.

Once fully mustered, the 369th was transported to Dollersheim in Germany, where it was fully equipped and the men swore an oath of allegiance to the Führer, the Poglavnik (the NDH leader), to Germany, and the NDH. This was followed by three weeks final training, after which the Regiment was deployed by train through Hungary to Dongena in Bessarabia. From there, the Regiment set off on a 750 km forced march through the Ukraine to reach the front lines.

On October 9th, 1941, the 369th Regiment was assigned to the German 100th Jäger Division, and from that point on was heavily engaged around the villages and towns of Petrusani, Kremencuga, Poltava, Saroki, Balti, Pervomajsk, Kirovgrad, Petropavlovsk, Taranovka, Grisin, Stalino, Vasiljevka, Aleksandrovka, Ivanovka and Garbatovo, eventually participating as the only non-German unit in the attack on the city of Stalingrad, entering the city on September 26, 1942.

The 369th Regiment's men participated in some of the fiercest battles in the attempt to take Stalingrad, and it cost them dearly. By the 13th of October 1942, the 369th Regiment was down to one weak battalion and 2 frail independent companies. Only 983 men remained of the original Regiment and all its reinforcements which had arrived from training facility at Stokerau.

The terrible losses continued to mount until, at the end of November 1942, there were just 5 officers, 9 NCO's and 110 soldiers left fit to fight. Food was carefully rationed and comprised only 120 grams of horse meat per meal, along with whatever bread was available. Of the 3 daily meals, only one was considered as approaching sufficient and even this consisted of only half of the required amount to sustain even rear echelon troops.

As December arrived, the few remaining Croatian soldiers of the 369th were frozen, hungry and suffering badly from a general lack of food, ammunition and weapons. On the 17th of December, 1942, the Volga River froze sufficiently to allow the Soviets to open another front from that side of the city as well, and on the 16th of January 1943, the Soviets launched a fierce attack from three sides of the Croatian positions, as the last beleaguered men of 369th struggled desperately to survive. With food, ammunition, medicine and supplies almost completely exhausted, the end was imminent. On the 23rd of January 1943, 18 wounded Croatians were flown out of Stalingrad - they were the last men of 369th to leave Stalingrad alive. Amongst these lucky souls was Croatian Sergeant Jurić, who wrote and carried with him to safety the Kriegstagbuch (unit war diary) of the 369th, thereby saving for posterity the ultimate memorial to the 369th Reinforced Regiment and its men. The only entry in the diary after January 23rd 1943 is "February 2, 1943, Stalingrad has fallen". It has since come to light that a handful of surviving Croatian Legionnaires, lead by Lt. Col. Marko Mesić, surrendered to the Soviets on February 2, 1943 at the building of the Soviet Airforce Academy in what was left of the city of Stalingrad. Thus the Croatian 369th Reinforced Regiment died.

It was also known as the Croatian Legion (Hrvatska Legija). 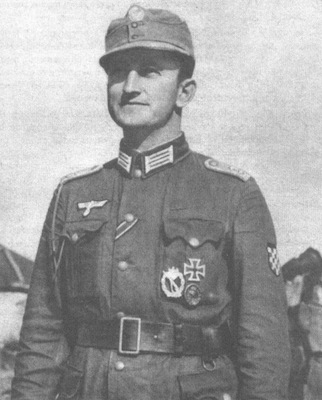