The Wolgatatarische Legion (Volga Tartar Legion) was formed in 1942 and was mainly made up of Volga Tartars but also of other volunteers from the region.
It was used to form 162. (Turkistan) Infanterie-Division in 1943.

The first design sleeve shield was blue/green with a white arrow crossed with a white dagger, on the top "Idel-Ural" was written in white.
The second design was also blue/green but with a yellow border, yellow text and instead of the dagger two sabres.
The third design was blue with a yellow border, yellow upward pointing bow and arrow and the text "Idil-Ural Tartar Legioni" around the badge.

Sleeve badge of the first design 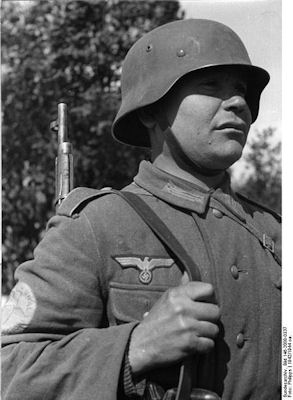