The Georgische Legion (Georgian Legion) was formed in December 1941 and was made up mainly of Georgians but also included volunteers from other peoples of the region.
It was used to form 162. (Turkistan) Infanterie-Division in 1943.

A sleeve badge with the flag of the Georgian Republic (1918-1921), red with a canton horizontally divided black/white with the text "Georgien" above was approved 1942. 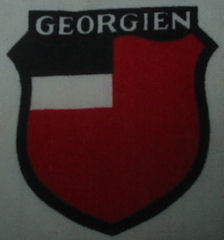