The Kalmüken Verband Dr. Doll was formed in October 1942 from buddhist Kalmyk volunteers around a nucleus from Abwehrtrupp 103 and consisted at the time of two squadrons. Its creation was authorized by the commander of 16. Infanterie-Division (mot) who wanted to use them to cover the supply lines.
In January 1945 it was planned to be made a part of Kaukasischer Waffen-Verband der SS, but this never occurred.

It was reorganized as a reinforced cavalry regiment at Neuhammer and in March it was transferred to Croatia were it was subordinated to the XV SS Kosaken-Kavallerie-Korps. During the withdrawal to Austria most of the soldiers were captured by the partisans, the rest surrendered to the British forces only to be handed over to the USSR after the war.

It was also referred to as Kalmücken-Legion or Kalmücken-Kavallerie-Korps. Dr Doll was the codename of its first commander, Sonderführer Othmar Rudolf Werba.

A visvavajra, a Buddhist thunderbolt-cross was worn as a sleeve insignia. 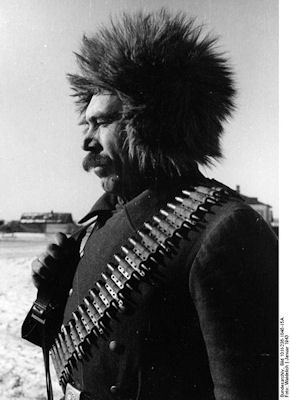