The Führer-Begleit-Bataillon (FBB) was formed in June 1938 as Kommando Führerreise from 7. & 8. Kompanie of Infanterie-Regiment (mot) Großdeutschland, it was redesignated Führer-Begleit-Kommando and on 1 October 1939 it was redesignated FBB. It was used to guard Hitler's military headquarters (as well as the railway tracks used by the Führer trains) and to guard him on visits outside Germany.
The decision to have an a security escort unit in the structure of a battalion was taken the days before the Polish Campaign and with order from 24 August 1939 ("Aufstellungsbefehl") the order of battle for the unit was fixed. Having started with two platoons mainly in late August 1939 the preliminary three company structure was reached during fall of 1939 and towards the turn of 1939/40 finally.
The military newspaper reported on 1 October 1939:

Following the return of the FHQu from the Eastern Theatre, the Führer-Begleit-Bataillon was formed from the units of the Wehrmacht which had provided military protection for the Führer during visits to the front. The Führer and Supreme Commander bestowed upon the battalion the standard carrying the Führer emblem and the national embelm of the Reich. (1)

Until summer 1942 the FBB was subordinated to the Kommandant Führerhauptquartier. During these first years the Kdt. FHQ was simultaneously the battalion commander.


The primary duty of the FBB was the protection of the FHQ. But it was also intended and exercised that elements of the unit should rotate to the combat zone. Therefore out of the battalion Kampfgruppen were built several times and sent to the front, thereby standing under direct command of the Führer although they were attached to higher headquarters there. After finishing their frontline tasks the remnants of the Kampfgruppen returned to the home based FBB at the FHQ. Due to this rotation the FBB practically had a strength of two battalions.

See also Kampfgruppen of the Führer-Begleit-Bataillon.

Erwin Rommel ("The Desert Fox", forced to committ suicide to avoid trial for involvement in the resistance against Hitler, the Bundeswehr barracks Generalfeldmarschall Rommel-Kaserne in Augustdorf was named in his honour 1961 and the Rommel-Kaserne in Dornstadt/Ulm in 1965 as was the Bundesmarine destroyer D187 Rommel)

A cuff-title with "Führerhauptquartier" in golden-yellow Gothic writing on black background was introduced pre-war and was worn on the lower left sleeve (as opposed to the unit cuff-titles worn on the right sleeve). On 15 Jan 1941 a new pattern of the cuff-title was introducted, this time in aluminium thread Sütterlin script.
The "Großdeutschland" was also used by soldiers of this unit.
The Hermann Göring soldiers attached to FBB wore the "German Göring" cuff title until 1942 and from then on "Herman Göring".

The men of the unit wore white Waffenfarbe throughout, piping and GD ciphers. This led to the very unusual circumstance of black Panzerjacke with white piping in the armored car platoon.

On 30 September 1939 Hitler personally presented the unit with a unique standard, on one side the normal infantry standard only in red (normally the color used by artillery units) and on the other side the Führerstandarte, the personal flag of Adolf Hitler. 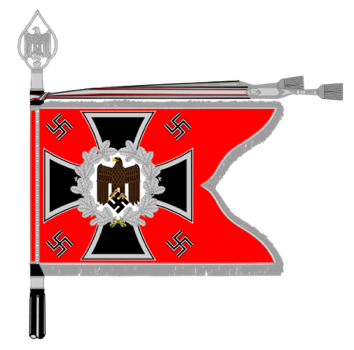 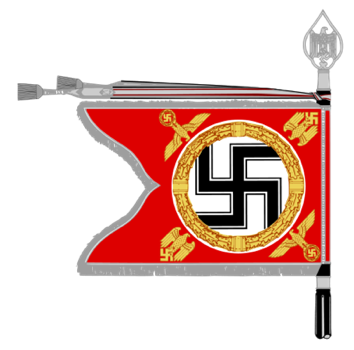 1. "The History of the Panzerkorps Großdeutschland, Vol 1" by Helmuth Spaeter, page 40.
2. Rudolf Kiehl who was known to General Erwin Rommel since the days in Poland later was handpicked by Rommel to command Rommel's own escort battalion in North Africa. This Kampfstaffel des Pz.AOK Afrika was known also as Begleitkommando Rommel or just Kampfgruppe Kiehl. Hptm Kiehl received the KC in that position in July 1942.