The 1. Kavallerie-Brigade was raised on 1 October 1934. It took part in the invasion of Poland with the 3. Armee with the town of Myseinice as the first objective.

On 1 September a very unique event during the Polish Campaign took place - Polish and German cavalry met in combat while being mounted, both units charged against each other. It took place in the Krolewskie Forests near the town of Krzynowloga Mala. Small Polish patrol from 11th Legionary Uhlan Regiment (Mazowiecka Cavalry Brigade) under command of lt. Wladyslaw Kossakowski during a reconaissance, met a small German cavalry patrol from 1. Kavallerie-Brigade. Kossakowski decided to start a battle - close combat with sabres and probably lances on the Polish side (this was probably the only incident during the campaign when Polish cavalry used lances), and sabres on the German side. Casualties were suffered on both sides and the fight ended without a clear winner.

It saw successful action against the Polish 7th Uhlans near Frankowo on 3 September and was assigned to the 12. Infanterie-Division.

On 23 September it fought against the Polish 25th Uhlans near Krasnobrod, possibly initially in the classical cavalry style though different sources state different things, the Poles with their lances and the Germans with their sabres, the Polish cavalry got the upper hand but was cut to pieces by machine guns.
After showing the value of cavalry in the Polish campaign it was upgraded to 1. Kavallerie-Division in February 1940.

1. Kavallerie-Brigade on parade at the Saxon Palace in Warsaw, Poland in 1939 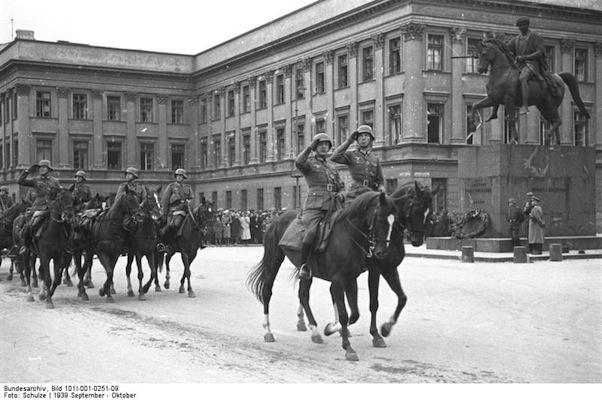