The 2. Fallschirmjäger-Division was formed around Fallschirm-Jäger-Regiment 2 from Fallschirmjäger-Brigade Ramcke in February 1943 and was sent to Nîmes, France, as a reserve force. It was sent to Italy following the Allied landings and took part in the occupation of Rome on 9 September.
Elements of the division made an airborne assault on the island of Elba to capture the Italian garrison on 17 September and they also took part in the recapture of the island Leros from the British forces on 12 November.
It was transferred to the Eastern front in late November with parts of it (I./FJR.2, II./FJR.6 and I./Luftlande-Sturm-Regiment 1) remaining in Italy to form 4. Fallschirmjäger-Division.
In May 1944 it was transferred to Germany for refitting, it was soon sent to Normandy were it was mainly used as a reserve force. It took part in the defense of Brest August to September 1944 and was captured when that city fell.

Jedburgh-Team Giles (an Allied special forces team commanded by Captain B. M. Knox) reported that a "considerable number" of POWs from this division were killed by French partisans in the Finistère area of France in early August 1944 in retaliation for killings by the German forces. (1)

It was reformed in November 1944 in the Netherlands and fought against the western Allies before ending the war in the Ruhr pocket.
In the final part of the war a large number of Hitler Youth members were assigned to the Fallschirmjäger-Regiment 7 in Essen.

Hermann-Bernhard Ramcke (Holder of the Knight's Cross with Oak Leaves, Swords and Diamonds)

Soldiers of 2. Fallschirmjäger-Division in Rome during Fall Achse 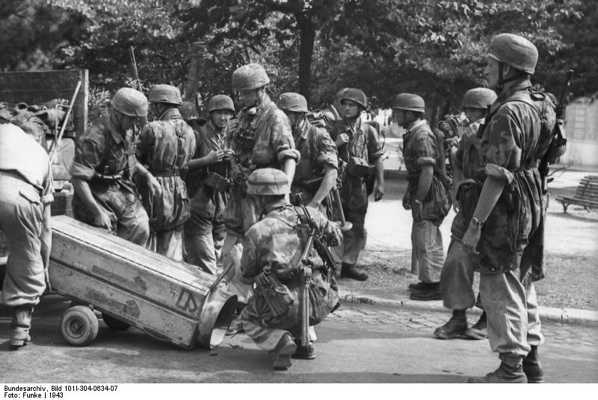 A memorial of the division in an Italian cemetary 1942 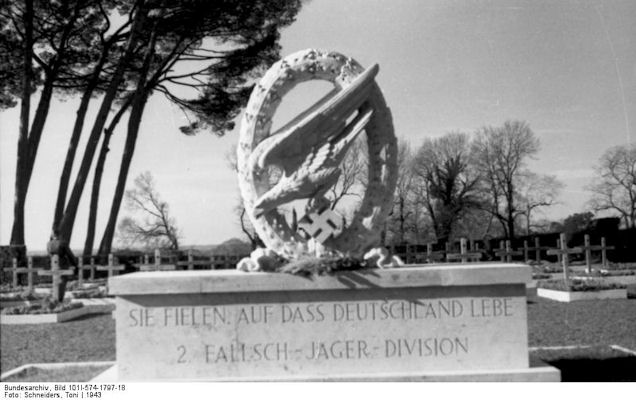