The 7. Flieger-Division was formed in 1938 to command all the parachute forces of the Luftwaffe and was reported as combat ready on 1 September 1938 in time for Operation Grün, the planned invasion of Czechoslovakia but that operation was cancelled following the Munich agreement.
Elements of the division took part in the fighting in Poland though only as motorized infantry in the middle of September 1939.
During Operation Weserübung, the invasion of Denmark and Norway elements of the divisions were successfully used to capture key air field in both countries in April 1940, for example the Airborne assault on Sola Airfield 1940.
A 185 men strong company under Oberleutnant Herbert Schmidt was dropped near the near the vital railroad junction of Dombås 14 April where they blocked traffic between Oslo and Trondheim until they were forced to surrender to the Norwegian forces after five days of heavy fighting.
Elements of the division was dropped at Narvik in May to support the gebirgsjäger fighting there.
On 2 June 1940 a Junkers Ju 52 transport plane carrying paratroopers accidentally crossed into Sweden and was shot down by Swedish anti-aircraft fire killing seven of those on board.

Most of the division fought in the invasion of the Netherlands, primarily to capture three key bridges (Schachter,  Veldwezelt and at Vroenhoeven) and the Eben Emael fortress as well as the failed attack on the Hague where a large number of Germans were taken prisorner. During the fighting in the Netherlands the division commander Kurt Student was accidentally shot in the head by soldiers from Leibstandarte SS Adolf Hitler.
During the summer of 1940 the division was preparing for the planned invasion of the United Kingdom, Operation Seelöwe, but those plans were shelved in October.
In April the second regiment took part in the invasion of Greece, Operation Marita, with an parachute assault near Corinth to capture a key bridge.

In May the division took part in the attack on Crete, the divisions were divided up this way:

During the fighting on Crete a platoon led by Wolfgang Graf von Blücher was surrounded by troops from the "Black Watch" near Heraklion on 20 May and was running low on ammunition and supplies with most of the men wounded. At this point his brother Leberecht Graf von Blücher rode to his position carrying ammunition and managed to reach them but was shot just as he did so and died. Wolfgang Graf von Blücher was killed the following day.
The third and last brother, Hans-Joachim Graf von Blücher, was also killed during the battle of Crete but his body was never found.
The locals told a story after the war about about a ghost rider on this location but they thought it was the ghost of a british officer.

The fighting was very heavy on Crete and the division suffered very heavy losses and Crete became the last big German parachute assault during the war. XI Fliegerkorps lost 3352 killed or missing and 3400 wounded out of a force of 22000.

Following the battle for Crete the division was refitting and coming up to strength with new recruits. In September it was sent to the Eastern front to fight near Leningrad and it remained in the east until December when it was transferred back to Germany. FJR 2 remained on the Eastern front until June 1942 and when it returned to Germany it was detached from the division to form 2. Fallschirmjäger-Division.
In October it was again back on the Eastern front where it remained over the winter and in May it was transferred to France for rest and was it was redesignated 1. Fallschirmjäger-Division in May 1943.

During the invasion of Crete over 100 civilians were killed on the order of Generaloberst Kurt Student in retaliation for their involvement in the killing and mutilation of several dozen paratroopers who caught caught in trees during the landings. Student was convicted of the crime in 1946 by a British tribunal but it was later overturned.

At Kondomari an estimated 60 male civilians were killed on 2 June 1941 by a detachment commanded by Oberleutnant Horst Trebes (KIA in Normandy 1944) in retaliation for attacks on the German forces by Cretan civilians. The kriegsberichter (war correspondent) Franz-Peter Weixler photographed these events and spent several years in prisoner during the war for this and for allegedly helping a Cretan escape. (3)

The village of Kandanos was razed to the ground 3 June 1941 in retaliation of an attack on a fallschirmjäger patrol by Cretan civilians. A sign was put up by the Germans following the event with the text "In retaliation for the bestial murder of a paratroop platoon and half an engineer platoon by armed men and women in ambush, Kandanos was destroyed". 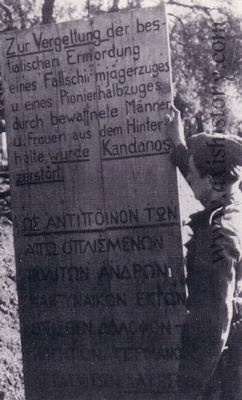 The 2001 board game "Fallschirmjaeger: The Airborne Assault on Fortress Holland" designed by Alan Wambold & Dean Essig and published by The Gamers focused on the fighting in the Netherlands in May 1940. 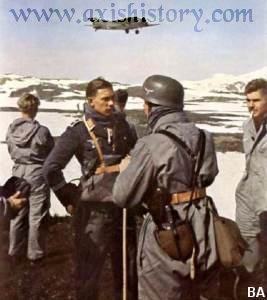 Fallschirmjäger at Bjørnfjell in Norway 1940 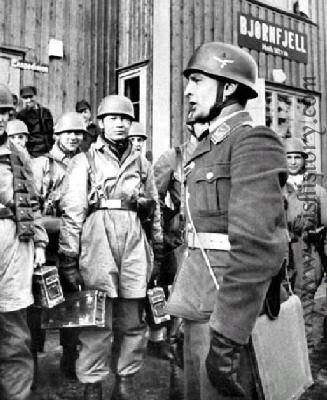 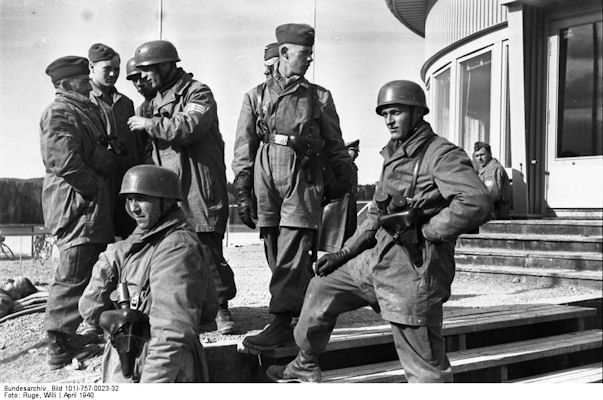 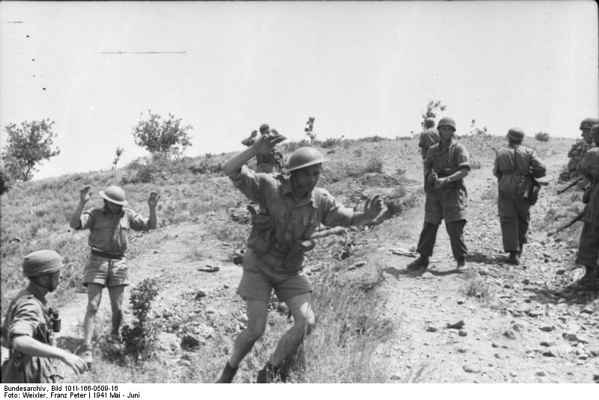 1. Generaloberst Kurt Student was wounded 14 May 1940 when he was struck in the head by a stray bullet while in Rotterdam negotiating the Dutch surrender. The bullet was probably fired by troops of the Leibstandarte SS Adolf Hitler.
2. Generalleutnant Wilhelm Süßmann was killed 20 May 1941 when his DFS 230 glider, en route to Crete, crashed on the island of Aegina after the tow rope parted.
3. "Kreta: Erövring och motstånd" by Anthony Beevor, page 281.