The 1. Kosaken-Kavallerie-Division (also 1. Kosaken-Division) was authorized to form in April 1943 and was formed from the cossacks in Cherson (who had fled the advancing Red Army), volunteers from POW camps as well as some Cossack units already serving alongside the Wehrmacht in the Reiterverband von Pannwitz.
It spent the summer in training and left from Croatia in September 1943. The first elements arrived 25 September and were stationed in Syrmien under the command of 2. Panzer-Armee and was used to provide rear area security.

On 12 October it was sent on an anti-partisan sweep in the Fruška Gora Mountains, for this mission 15 tanks and 1 armored car were attached to the unit. The partisans withdrew rather than fight and once the village of Beocin with its partisan HQ was taken the operation, the first major operation of the Cossacks, was aborted.
After this operation it was given the task of protecting the Zagreb-Belgrade railroad as well as the Sava valley. Elements of the division took part in several anti-partisan operations during the fall of 1943, for example Don-Kosaken Reiter-Regiment 1 fought near Sisak along with 11. SS Freiwilligen-Panzergrenadier-Division Nordland and Sibirisches Kosaken-Reiter-Regiment 2 fought around Gora and Glina together with 371. Infanterie-Division.

Kosaken-Reiter-Brigade Kaukasus II was in Bosnia guarding the railroad near Sarajevo against the partisans as well as the chetniks until January 1944 when it was withdrawn to Croatia, taking part in the anti-partisan operation Napfkuchen on the way.
It took part in the major anti-partisan operation Rösselsprung, famed for the actions of SS-Fallschirmjäger-Bataillon 500, in May 1944 seeing heavy action and taking hard losses, especially Sibirisches Kosaken-Reiter-Regiment 2 that were encircled by partisan forces for several days before the arrival of a Cossack relief force was able to break the encirclement.

I have been in the army since I was fifteen. To leave now would seem to me like desertion. (1)

Generalmajor Helmuth Pannwitz in a meeting with Heinrich Himmler 26 August 1944 on transferring to the Waffen-SS.

The anti-partisan duties continued for the unit during the summer and in August the Waffen-SS took over responsibility for supplying the unit, whether or not the Cossack units were actually transferred into the Waffen-SS and if so, to which degree, has been debated post-war.
Whether or not they were now part of the Waffen-SS or not, was a question that made little difference to the Cossacks, the fighting against the partisans continued and was getting steadily harder. In December the Cossacks saw their first action against the Soviet Red Army at Pitomaca, an engagement which ended in a Soviet withdrawal.
In January 1945 a Cossack corps, XV SS Kosaken-Kavallerie-Korps, was formed and Kosaken-Reiter-Brigade Kaukasus II was used to form 2. Kosaken-Kavallerie-Division.

Apart from the Soviet Red Army, the Cossack units also saw action against the Bulgarian forces during the fighting in Hungary. Franz-Wilhelm Mach was awarded the Knight's Cross for leading the only known and confirmed night attack of an entire cavalry unit, they rode sabres swinging against Bulgarian artillery position, the 400 riders captured the artillery cannons and captured 450 prisoners on 22-23 March 1945.

At the end of the war the cossack units surrendered to the British forces in Austria after receiving a guarantee from a British General, possibly General Archer, that they would not be turned over to the Soviets. This soon changed however and they were turned over to the USSR a few weeks later, many of them being executed, including several of the German officers serving in those units, and the rest doing hard labour for a long time.

Franz-Wilhelm Mach (Awarded the Knight's Cross for leading the only known and confirmed night attack of an entire cavalry unit. They rode sabres swinging against Bulgarian artillery position, the 400 riders captured the artillery cannons and captured 450 prisoners on 22-23 March 1945.) 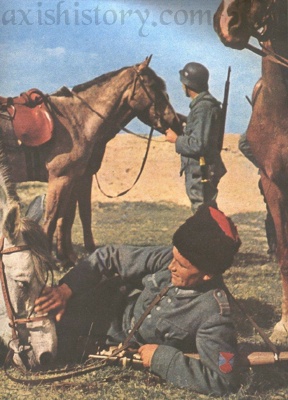 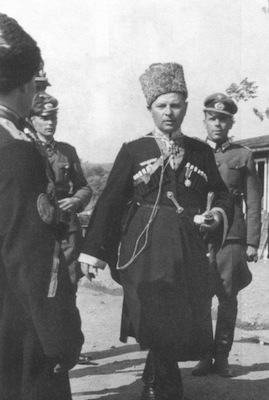 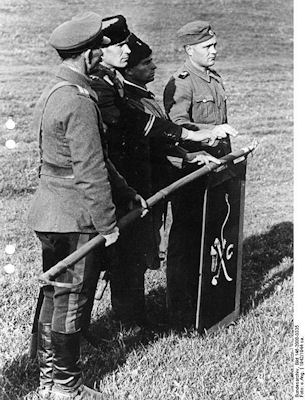 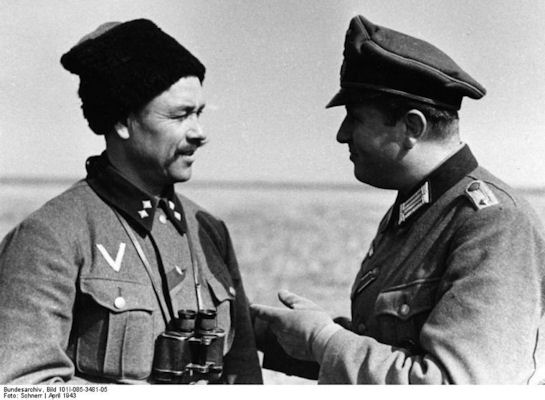