After being on occupation duties until 2 February 1944 the division was ordered to transfer to East Prussia (at that time still a two regiment unit) where it was reorganised. In March 1944 the 214th arrived at the Narwa front where it was to replace the 227. Infantrie Division (the Stern Division). In April 1944 the division was transferred again, this time to the XLII Korps, Heeresgruppe Nordukraine, where it participated in battles at Kowel. After hard battles they were withdrawn to the  Weichsel-bridgehead until January 1945, when the 214. Infanterie Division was destroyed and only small parts managed to retreat to Silesia.

On 20 November 1942 the soldiers of the III./355 IR under the command of Oberst Petri were ordered to execute 14 British commando soldiers which were captured while landing far from their target area (the commando mission was codenamed Operation Freshman).

Memorial tablet on the site of the execution 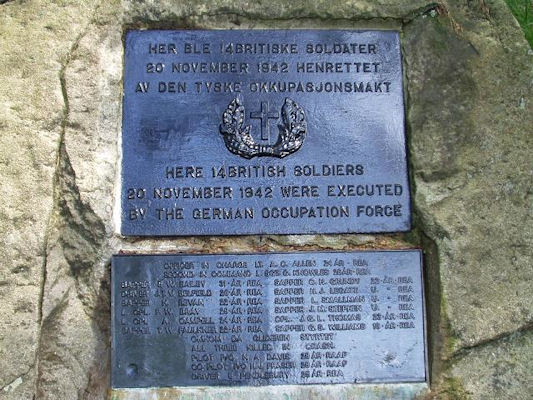 Edmund Kiss (Archeologist best known for his work on the Tiwanaku in Bolivia, he was later involved in the SS sponsored Ahnenerbe)