It saw action during the invasion of Greece in April 1941 attacking and breaking through the Metaxas Line of defensive works (named after Prime Minister Ioannis Metaxas) from their positions in Bulgaria. After the fall of Athens the division remained there as an occupying force until the invasion of Crete.

Two flotillas of small vessels were assigned to take men from this unit to Maleme on Crete, one with 2.331 men and one with 4.000. The first flotilla left for Crete 20 May and was attacked by the British naval task force A1 led by Rear Admiral Sir Bernard Rawlings and 12 vessels were lost, the unit suffered 300 dead. The second one left two days later and was attacked by task force C led by Rear Admiral Edward Leigh Stuart King and while Luftwaffe aircraft forced the British to call of the attack, the flotilla returned to port. During the rest of the invasion all transport of Gebirgsjäger troops to Crete were made by aircraft only.
After men from Gebirgs-Pionier-Abteilung 95 were attacked by armed civilians during fighting on the western parts of Crete, an order was issued by the division saying that for every German soldier killed by civilians, 10 civilians would be shot. It is not know if any such retaliation were carried out.
The division lost a total of 20 officers and 305 other ranks killed and 18 officers and 488 other ranks missing (most downed) during the invasion.

The winter was spent in Germany training and in March it was sent to the Eastern front southwest of Leningrad where it fought the Red Army offensives until November 1943, taking part in among other things the destruction of the surrounded Volkhov Front and it suffered heavy losses during the constant “fire brigade” actions in defense against the Soviet onslaught.
It was sent to Italy and the Gustav Line in the fall of 1943 where it took part in the fighting near the famous Monte Cassino and Gustav Line. The division took part in the fighting retreat north through Italy fighting not only the Allied forces but also the partisans before surrendering to the US Fifth Army north of Turin at the end of the war.

In addition to the regulation Edelweiss cap and sleeve insignia, personnel of the 5. Gebirgs-Division wore a semi-official badge on the left side of the Bergmütze beside the Edelweiss: a stylized white metal chamois mountain antelope (Gamsbock) standing on a triple mountain peak.

Soldiers from 5. Gebirgs-Division on their way to Crete 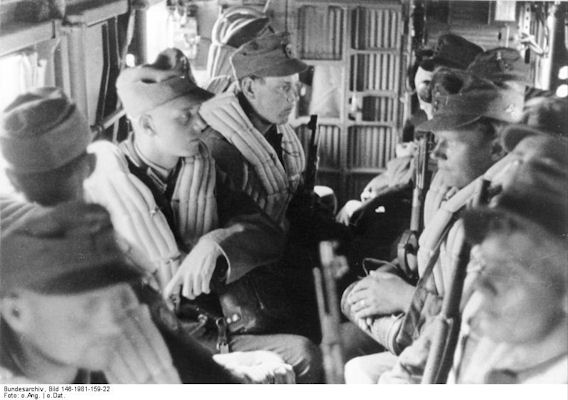