Militärbefehlshaber Frankreich was formed on 16 October in Paris in order to control the entire occupied French territory except the two northern départements, Nord and Pas-de-Calais, which were placed under the HQ of Militärbefehlshaber Belgien-Nordfrankreich. The first Milbefh., General Otto von Stülpnagel, was appointed on 25 October 1940.

Ernst Jünger (Famous author, most well-known for "In Stahlgewittern", "Storm of Steel") 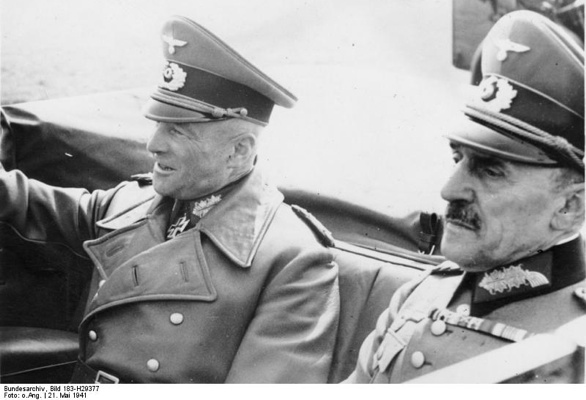 1. After disagreements with the OKW, Otto von Stülpnagel was replaced with a cousin of him, Carl-Heinrich von Stülpnagel.
2. Carl-Heinrich von Stülpnagel was one of the most active and determined members of the military opposition against Hitler outside Berlin during the hours of the 20th July plot 1944. He was in contact with the military circle of the resistance around General Beck since 1938. He was fully involved in the planning of Graf Stauffenbergs assassination at the “Wolfsschanze” in Rastenburg that day and especially became the central figure of the activities in Paris after the estimated death of Hitler. After the codeword “Walküre”, by his orders appr. 1.200 members of the NS regime in Paris had been arrested, amongst them nearly all the important leaders of the SS, the SD, and the Gestapo. Carl-Heinrich von Stülpnagel desperately tried to gain the support of OB West, Generalfeldmarschall Günther von Kluge. There was no chance to convince von Kluge to take part actively in the resistance during these risky first hours (von Kluge showed the same attitude like in Russia 1943 before, when he was contacted first ; he wasn’t against the resistance, but felt restricted to play an active role). When the message of the failure of the attempt on Hitler’s life and the consciousness that he survived, reached the departments in Paris, von Kluge advised von Stülpnagel to go underground. Von Stülpnagel didn’t do that and consequently had to be relased from his post by von Kluge. Upon an order by GFM Keitel, OKW, Carl-Heinrich von Stülpnagel was on the way to Berlin for an interrogation on 21 July 1944. He attempted to shoot himself near the city of Verdun, but failed and got injured and blind through that only. In a hospital in Verdun he was arrested by the Gestapo still on July 21th. Taken to Berlin, he was brought to court despite his injuries. He was sentenced to death by the Volksgerichtshof on 30 August 1944 and was hung the same day at the prison Berlin-Plötzensee.
3. Karl Kitzinger was Wehrmachtbefehlshaber Ukraine until this new appointment. He arrived in Paris on 28 July 1944.