From the very beginning of the German invasion of the Soviet Union in June of 1941, the German armed forces employed various "native" volunteer and conscript units in both front-line, anti-partisan and rear-area security roles.  Initially these were informal units, usually in company strength or smaller, that were recruited by individual German division, regiment, or battalion commanders as they pushed forward into the Soviet Union.  Often, these units were formed of volunteers who had actually approached the Germans first, wanting to aid them in fighting the dreaded communist regime.  The oppression of Stalin's brand of "Russian Communism" in areas with long and proud national histories distinct from "Mother Russia" had led to a great deal of resentment within the pre-war Soviet Union.  Cossacks, Turkistanis, Kalmucks, Estonians, Latvians, and many other groups within "Soviet" borders had their own national histories and traditions long before the creation of the Soviet Union.  Most of these groups also suffered rather horribly under Stalin's rule, which only fed the resentment even further.  There were even many Russians and Byelorussians who opposed Stalin's brand of communism, although they obviously did not also object to the dominance of Russian culture in the same way as  the Soviet ethnic minorities.  For the oppressed nationalities of the Soviet Union, the German invasion was seen as an opportunity not to simply to side with Germany against the hated Soviet regime, but to win independence for their own homelands - an independence from both Russian and German rule.  In order to reach their goal of independence, however, it was seen as necessary to collaborate with the Germans, at least initially.  When the German forces first crossed into areas such as Estonia, Latvia, and the Ukraine, and even the Crimea in 1942, they found themselves being greeted as liberators.  Hastily formed armed bands of anti-Soviet partisans uncovered weapons hidden for years in secret caches and harassed the Soviet units as they withdrew.  Volunteers came forward to join the advancing German forces, and the first eastern units were unofficially formed.  Heeresgruppe Nord, for example, had a number of volunteer Latvian and Estonian units operating under the 16. and 18. Armee from early in the campaign.

As the Wehrmacht pushed ever deeper into Soviet territory, two things became extremely clear.  First, the sheer size of the country required more manpower to "conquer" than the Germans may have originally appreciated.  Second, the original German estimate of the number of prisoners they would take was much lower than the actual number of prisoners taken in the opening stages of the campaign.  By the fall of 1941, several million Soviet soldiers had been taken prisoner, far higher than the German command's original estimate.  Whether on purpose, or by simple lack of preparation, many, if not most, of these men would end up dying of starvation or disease as they lingered in severely overcrowded POW camps.  From a purely logical point of view, this was simply a huge waste of potential manpower, especially given the general dissatisfaction non-Russian ethnic minorities felt about their "big-brother" Soviet government.  From a human perspective, it was a tragedy of immense proportion, if not a deliberate crime.

Osttruppen in 1941 with a Gebrigsjäger-officer 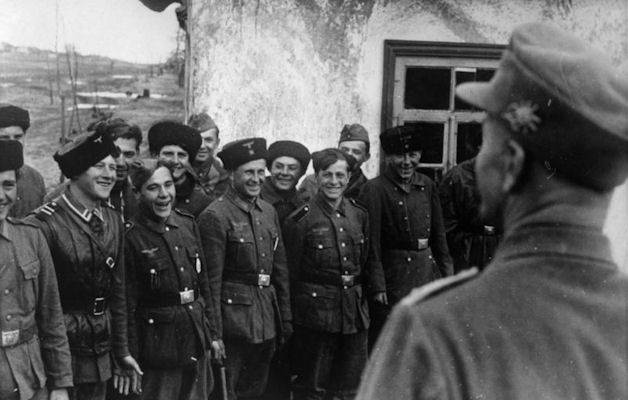 Obviously, much of the apprehension about employing these men in German service was the result of Nazi racial policy - Slavs and "Asiatics" were seen as inferior.  However, the bare facts of the brutal war in the East forced a change of attitude, although a reluctant one.  By October 1941, General Keitel had persuaded Hitler to allow some Soviet prisoners to be used in road construction behind German lines, and in the winter of 1941/42 the first official security units composed of Baltic volunteers were being formed.  The war in the East was not only brutal, but the size of the conquered territory, the atrocious racial policy of the Nazi administration of occupied territories, and the lack of adequate German security resources, led to extreme partisan activity behind the German front lines.  Unable to divert enough of their front line units to combat partisans in the rear, the German had to draw manpower from somewhere, and the "Eastern peoples" seemed to provide the perfect answer.  Capitalizing on the resentment against the Soviet system felt by so many ethnic minorities, such as the Cossacks and Turkic peoples, the Germans were able to form a number of volunteer "Eastern" battalions in 1942.  Using recruits from the POW camps, recently captured prisoners, plain old conscription, and men already acting as Hiwis (Hilfswillige or "willing helpers"), the Germans were able to fill out the ranks of these battalions rather quickly.

Osttruppen with civilians in 1942 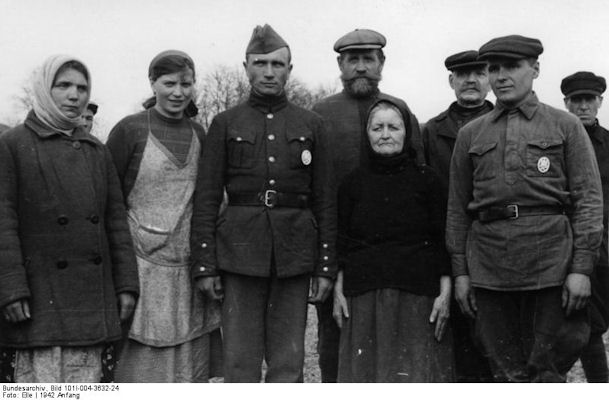 The Eastern battalions were organized roughly on the basis of ethnicity, with each battalion usually having its personnel drawn from a single ethnic group, with liaison and certain command positions filled out by a cadre of German officers and NCOs.   The Germans also drew a distinction between "Ost-Bataillone" and "Turk-Bataillone."  "Ost-" battalions were eastern units composed of Russian and Byelorussian personnel, with a sprinkling of Ukrainians, since the Germans did not seem to appreciate their differences.  "Turk-" battalions as a general term referred to eastern units formed from the "asiatic" Turkic peoples of the Caucasus, such as Turkistanis and Kalmucks.  The distinction was, however, more than aesthetic - the "Ost-" and "Turk-" battalions each had their own unique battalion organization.  Eastern battalions assigned directly to a German division used the number of the division, combined with "Ost-Bataillon" (or other appropriate ethnic title), as their designation.  Eastern battalions attached directly to a corps staff instead used the number of the corps plus 400 as their designated number, and eastern battalions used as GHQ troops in the army rear areas received a number in the 600-series.  All of these battalions were collectively referred to as the "Osttruppen," although by 1943 many of these battalions were given specific designations depending on their main ethnic component.  For example, battalions composed of Cossacks were designated as Kosaken-Bataillone, while Volga-Tartar battalions were referred to as Wolgatatarische-Bataillone.

Authorized Strength of the Ost-Bataillone, Pre-1944
* The number in parenthesis refers to the number of clerks, an administrative officer class.

Authorized Strength of the Turk-Bataillone, Pre-1944
* The number in parenthesis refers to the number of clerks, an administrative officer class.


The Germans also formed a number of Ost-Legionen ("Eastern Legions"), organized by ethnicity, during the same period that the actual Ost-Bataillone were being created.  The eastern legions were meant to be used as command staffs that coordinated and oversaw the training and deployment of eastern battalions of the respective ethnicity.  In practice, their main function was really only to supply replacements to the independent battalions, as the Ost-Bataillone assigned to the legions were never actually deployed together as a cohesive unit.  By the end of 1942, the following eastern legions had been created:

Volga-Tartar soldiers on parade in 1942 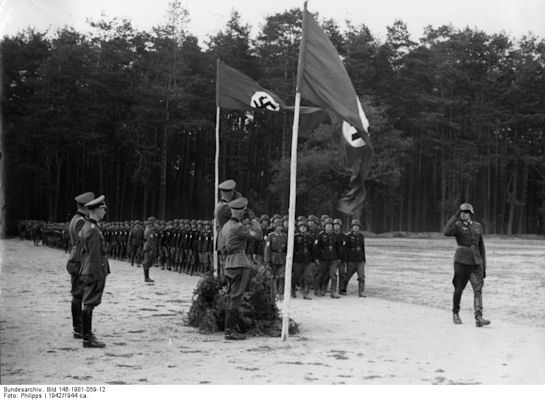 The region of the Caucasus in particular was home to several of the ethnic groups fighting on the side of the Germans.  Georgians, Azerbaijanis, Armenians, and Caucasians all hailed from the Caucasus.  In order to promote better unit cohesion and loyalty, the German Army attempted to divide some of the Caucasian peoples into units according to their religion.  Orthodox Christian Caucasians were placed in the Nordkaukasische Legion, the Georgische Legion, or the Armenische Legion (as appropriate), and Muslim Caucasians were placed in the Kaukasisch-Mohammedanische Legion, later renamed the Aserbeidschanische Legion, or the Turkestanische Legion.  Other ethnic groups from the Soviet Union, such as the Cossacks and Kalmucks, did not have their own ethnic legions, although they did form a significant number of eastern volunteer combat units.

In 1942, in addition to the various Ost-Legionen, the German Army used the staff of the disbanded 162. Infanterie-Division to supervise the training of Turkic-manned eastern battalions in the territory of the Generalgouvernement.  The division was itself reactivated on 21 May 1943 as the new 162. Infanterie-Division (turk.) (the original German 162. Infanterie-Division had been destroyed at Stalingrad), with Grenadier-Regiment 303 and 314, each with three infantry battalions.  The division was still located in the territory of the Generalgouvernement on 5 September 1943.  A second division of eastern troops, the 1. Kosaken-Division, was also formed during 1943, by using several pre-existing Cossack cavalry regiments organized under brigade-level command staffs.

On December 13, 1942 the position of Inspekteur der Osttruppen im OKH was created within the German Army high command.  This command position was charged with control of all of the eastern troop units within the German Army.  In practice this staff merely organized the training of eastern troops, and did not exercise any sort of tactical control over them.  The eastern troop command staff was designated General der Osttruppen in early 1943, and was renamed General der Freiwillige-Verbände on January 1, 1944.  On May 5, 1943 there were 10 regiments, 170 battalions, 221 companies, and 11 platoons/sections of Eastern Troops operating under authority of the General der Osttruppen. 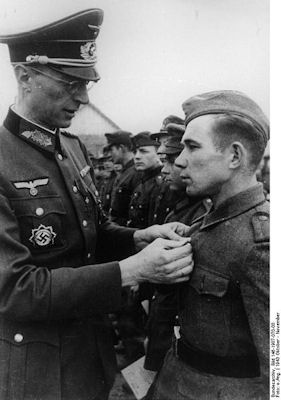 At the same time as the German Army was forming its "Ost-Bataillone," and in some cases before, the SS and Ordnungspolizei were forming their own "native" units for police and security duties from Lithuanian, Latvian, Estonian, and Ukrainian volunteers and conscripts.  The designation by which these native police units were known changed several times during the war, but they are generally referred to as the Schutzmannschaft.  The Schutzmannschaft (Schuma) battalions were police units under control of the local Higher SS and Police Commanders, and were given designations based on the duties they were intended to perform: "Wach-" for installation and depot guard duty; "Ersatz-" or "Stamm-" for replacement or training service respectively; "Front-" for front line combat duty.  There were even several "Pionier-" battalions composed of trained engineers.  In addition to the Schuma battalions, the SS and Ordnungspolizei formed several police rifle regiments for frontline and anti-partisan service from Byelorussian, Ukrainian, Latvian, and Estonian volunteers.  In May 1943 the Schuma designation, which had been in use since early 1942, was dropped in favor of "Polizei-", which was more in line with the battalions' actual functions.  At the same time, the police regiments formed from mainly non-German personnel became "Polizei-Schützen-" regiments.  The initial composition of a Schuma battalion was an HQ Company and three infantry companies.  This was later changed to four companies of 124 men each, an HQ Company, and an additional Staff Company of three rifle platoons and a machine gun platoon.  Many of the original volunteers for these native police units would eventually volunteer for or be conscripted into the new divisions of the Waffen-SS that were being formed from Latvians, Estonians, and Ukrainians.  The native police battalions continued to serve in anti-partisan and frontline combat roles to the end of the war, but by 1944 more and more of their personnel were being forced into the "volunteer" Waffen-SS divisions such as the 14. Waffen-Grenadier-Division der SS (ukr. Nr. 1), 15. Waffen-Grenadier-Division der SS (lett. Nr. 1), and 20. Waffen-Grenadier-Division der SS (est. Nr. 1).