The Russkaya Osvoboditel'naya Armiya (Russian Liberation Army, abberivated in Cyrillic as РОА but in Latin as ROA, also known as the "Vlasov Army", not to be confused with the 1st Russian National Army) was organized by former Soviet Red Army Lieutenant General Andrey Vlasov (commander of the 2nd Shock Army when captured 12 July 1942) in an attempt to unit the numerous different Russian manned units fighting alongside the Germans. It was not until the fall of 1944 that Hitler finally permitted the formation of ROA divisions having until refused despite the huge number of Soviet citizens serving in various parts of the German forces.
It was officially renamed Vooružennye Sily Komitet Osvoboždenija Naradov Rossii (VS-KONR, Armed Forces of the Committee for the Liberation of the Peoples of Russia) 14 November 1944.
Two ROA divisions were formed:
600. (Russische) Infanterie-Division (1. Division ROA)
650. (Russische) Infanterie-Division (2. Division ROA)

A third one, 700. (Russische) Infanterie-Division, only began formation. Several existing formations were assinged to the ROA, including
Russkiy Okhranniy Korpus
XV. SS-Kosaken-Kavallerie-Korps

1. Division (ROA) under General Sergei Bunyachenko saw action against the Red Army on the Oder on 11 April 1945 where it suffered heavy losses and retreated south.
On 5 May the Prague uprising against the German occupation broke out and the ROA division decided to support the insurgents and fought against the German troops providing important support with their heavy weapons. The Czech communists refused to accept them as part of the anti-German forces and they were forced to leave Prague the following day.

Most of the Russians were captured by the Red Army or were later forcefully extradited to the USSR where the leaders were executed and the rest sent to the Gulag for many years.

A sleeve badge with the letter POA and a blue St Andrew's Cross on white was used. 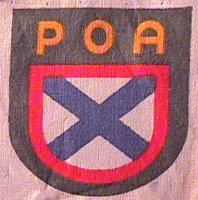 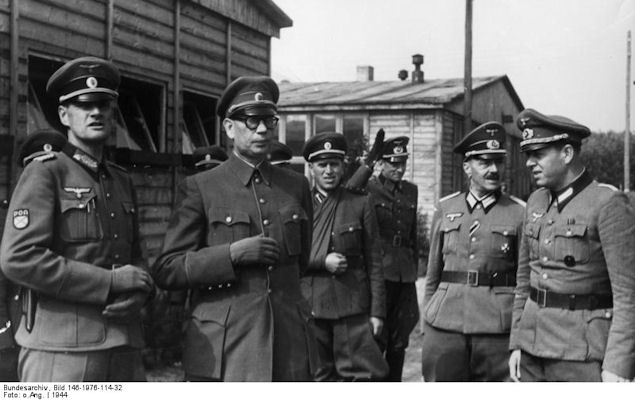 A ROA soldier with a German military police 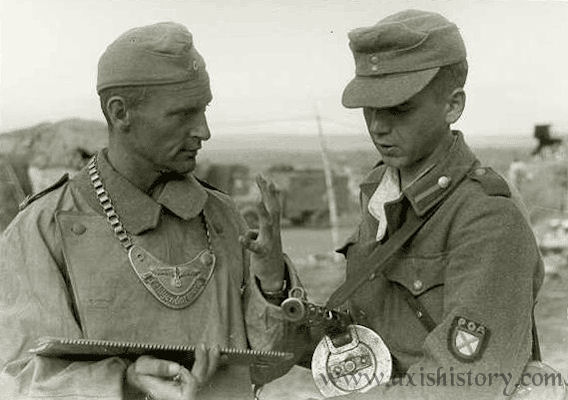