Romanian volunteers in the Waffen-SS

by Marc Rikmenspoel
(with additional information from Razvan Codrut)

There were plans to form a Waffen-SS division from Romanian volunteers following the Romanian defection, a Waffen-Grenadier Division der SS (rumänische Nr. 1) with blessing of the Romanian Government-in-excile led by Horia Sima (leader of the Iron Guard or Garda de Fier). However after the trouble the Waffen-SS had had setting up other divisions out of unformed masses, it was decided to concentrate on establishing a combat capable regiment first, with the other elements to follow gradually. Still, Staf. Ernst Ludwig was named as first division commander (probably more as commander of the formation staff, than as actual full commander). But he was not considered especially capable, his main advantage was that he was a Sieberburgen German who had served in the prewar Romanian Army (alongside Artur Phleps, who recruited him for the Prinz Eugen Division in 1942). Eventually, Ludwig would perhaps have commanded the artillery regiment of the Romanian SS-Division.
Ludwig was replaced as divisional commander by Staf. Willy Fortenbacher, who held that post for the rest of the war (Ludwig became "assistant division commander"). Stubaf. Gustav Wegner commanded the 1st regiment of the proposed division. He had formerly commanded the EuA Bataillon of the 18. SS Freiwilligen-Panzergrenadier-Division Horst Wessel. Before that, he had served at Sachenhausen concentration camp, and had perhaps met Horia Sima there (speculation is that Sima recommended Wegner for his position). The Romanian 4th Infantry Division was captured by the Germans in August 1944 after the cease fire, since it was refitting in German held territory.

Most of the manpower for the Romanian Waffen-SS came from this unit, though Iron Guardists fled to German held territory whenever possible, and much of the Iron Guard leadership had been in German protective custody since 1940 (when their coup attempt against Antonescu had failed) since they would have been imprisoned and/or executed in Romania (the Iron Guard had very good relations with the SS, while Antonescu's military government had good ties with Ribbentrop and the German Foreign Ministry). So the manpower of the Romanian Waffen-SS came from men of the 4th ID, while the leadership was a mixture of Romanian Army (from the 4th ID) and Iron Guard activists.

The 1st Regiment was fully combat capable with four companies, and the intention was to have it fight where it could not come into contact with other Romanians (by German and Romanian desire). So it was assigned to the III. (germanishes) SS-Panzerkorps along the lower Oder front in March 1945. As a component of the corps, it was renamed as Waffen-Grenadier Regiment 103 (not Panzer Regiment as some sources suggest). The regiment was destroyed in the fighting after the Soviet Berlin offensive began on April 16, 1945. Many men escaped, and survivors went into Western Allied captivity, and were not forced to return to Romania. Most seem to have settled in Brazil (where there is still an Iron Guard colony!), but some came to the USA (the leaders with Iron Guard pasts were forced into exile in the early 1980's).

The 2nd regiment did begin to form, but weapons were lacking and it was used as a construction unit. The 3rd regiment never began to form. These units mostly also made it to Western captivity and resettled abroad after the war.

Around 70 Romanians did serve with SS-Jagdverband Südost. Benesch (a German) was the overall commander, with Iron Guard officer Virgil Popa as the Romanian commander. There were grandiose plans for the success of the Frülingerswachen offensive in Hungary in early March 1945. The 6. SS-Panzer-Armee hoped to advance east and recapture the Ploesti oil region. Teams of Romanian commandos were dropped into Romania to 1) start a partisan movement, and 2) occupy key bridges and such should the Germans advance that far. Of course, that never came to be, and the partisan movement never amounted to much (there were some, but never on the scale of the Forest Brothers in the Baltic). 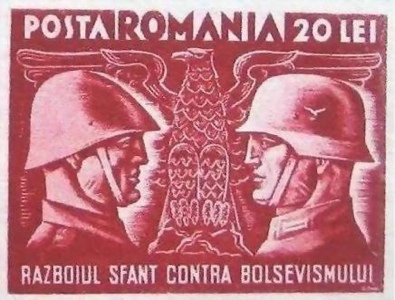