The Milice francaise was created by a law implemented on January 30th, 1943. It was originally a political movement, supervised par Pierre Laval (Birth: 1883, Death: 1945, fire squad, Petain Prime Minister) who was its' nominal commander, and directed by Joseph Darnand (Birth: 1897, Death: 1945, fire squad, Waffen-Sturmbanfuhrer der SS, 43), General Secretary.
Its root lie in the creation of the “Legion Francaise des Combattants” (French Combatants Legion) on August 29th, 1940 in the Southern “Free” zone; Germans forbade it in occupied France. The Legion was mainly composed of veterans supporting the Marshal Petain regime. In 1942, it had 1,5 millions members, including the one in North Africa and other French colonies.
In 1941, to give some strength to that “mild” Legion, Joseph Darnand, at that time in charge only in the “Alpes Maritimes” (French South East district next to Italy and the Mediterranean Sea), created the Service d’ordre Legionnaire (SOL – Legionnaire Security Section). His intention was to regroup the youngest and most motivated supporters of the Petain “National Revolution”.
Supported by Admiral Francois Darlan (Birth: 1881, Death: 1942, assassinated, Petain Prime Minister) and Pierre Pucheu (Birth: 1899, Death: 1944, fire squad, Interior Minister), the SOL became official on January 12th, 1942 and Darnand was appointed as General Inspector, based in Vichy. The movement was also forbidden in the German occupied zone. Early 1942, the SOL had about 20,000 members, most of them anti-Germans but supporters of the Petain “national revolution” and also anti-Gaullists and anti-Communists
The evolution of the SOL was accelerated by the return of Laval in power (April 1942) and by the Allied forces landing in North Africa, where some SOL participated in battles against the Americans, fighting within the Phalange Africaine.

On January 5th, 1943, in Vichy, in front of the Legion representatives, Marshal Petain announced the transformation of the SOL into the Milice Francaise, confirmed by a law on January 31st. Laval eventually had “his own” police force.
The Milice was given 3 responsibilities: Vigilance, propaganda and security. In the civil war climate that was developing in France at that time, the future of the Milice as an auxiliary pro-German police was obvious.
Darnand, General Secretary, was first assisted by Pierre Cance (1907-1988, Waffen-Sturmbannführer der SS, 1944) then by Francis Bout de l’An (1908-1977) when Cance joined the Waffen-SS in October 1943.
On June 2nd, 1943, the Franc Garde was created within the Milice. This group was partly permanent, unlike the “part time” Milice and was mainly oriented towards security and police tasks. Commandant Jean de Vaugelas is at their head (Waffen-Sturmbannführer der SS, 1944, Birth: 1913 – Death: 1954 in Argentina. Car accident? SDECE French secret services execution? Nobody knows yet).
But up to November 43, that Franc Garde did not receive any weapons. So, before being a repression tool, they were be targets. The Resistance assassinated several dozens of them before Darnand gave them the order and the means to fight back. The question of the weapons and the retaliation to the assassination was of the utmost importance in the evolution of the Milice. It will make out of this movement an auxiliary police force often brutal and accused by its opponents of the worst crimes.
The solution to this weapons problem came at the end of 1943 after several rounds of discussion between Darnand and the SS: The Milice would encourage the recruitment of Waffen-SS for the Eastern front and, in exchange, the SS will provide the Milice with light weapons.
About 200 Miliciens joined the Waffen SS,  including Pierre Cance, Noel de Tissot, Leon Gauthier and Henri Fenet. We will talk more about them in the French Waffen-SS pages, especially Henri Fenet.
On December 30th, 1943, Darnand became General Secretary for the “maintien de l’ordre” (Security). He became Interior State Secretary on June 13th, 1944, at the peak of what many French historians call the civil war.
On January 27th, 1944, the Milice was eventually authorized to recruit in the Northern France area, the former occupied zone. Darnand, quite busy with governmental tasks, delegated the Milice management to Francis Bout de l’An. To help organizing this force, Jean Bassompierre (Birth: 1914 – Death: 1948, fire squad) and Francois Gaucher (1910 – 1990) were called back from the Eastern Front and appointed Inspectors.
In 1944, about 30,000 men were members of the Milice. 10 to 12,000 were really active, i.e. members of the Franc Garde.

In the climate of civil war that prevailed in France at that time, the Milice payed an heavy tribute, with many of its members assassinated by the Resistance. Philippe Henriot in Paris on 28th June 44, Jourdan and all his family in Voiran on April 20th 44 to mention a few. Most of those executions were carried by the FTP, i.e. the clandestine armed branch of the French Communist Party.
But from their end, they also executed whomsoever was linked to the opposition to Petain or supposed so: Helene and Victor Bash, Jean Zay, Georges Mandel, etc..
The Franc Garde was engaged in several operations against the “Maquis” (Guerillas): Glieres, Limousin, Burgundy, Brittany, etc… with contrasted results, mainly depending upon the qualification of the local officers. They were in fact not prepared for those police-type actions and their action would often be criticized in both camps.
In several instances, meeting with French resistant members of the AS (Secret Army, Gaullist) or ORA (Army resistance organization), avoided fighting, especially in the Limousin area where the strength of the communists were pushing the other resistance groups to avoid losses as much as possible, already preparing for the liberation. Cases where, after some combat, both parties agreed to free their prisoners and vacate the place are known.
At the end of August 44, a large part of France was already liberated, the other part was in a state of semi-insurrection. The retaliation threat was extremely serious for both the Miliciens and their families. Darnand regrouped in Lorraine, next to Alsace, about 6,000 Miliciens and 4,000 of their family members. From there, they retreated to Germany. The saga of this gathering movement of dozens of Miliciens convoys was a nightmare: Permanently under threat of Resistance attacks, traveling with kids, women and elders in improvised vehicles, many of them will never reach Germany. Improvisation is the daily motto. They even had to almost attack some French Treasury Branches to get the fund required for food and fuel!
About 1,500 of them joined the 33. Waffen-Grenadier-Division der SS Charlemagne (französische Nr. 1). Most of the others will join Darland and will fight against the Partisans in Northern Italy. Many of them have been arrested after the war and usually condemned to heavy jail sentences for those who haven’t been summarily executed.
The Miliciens who couldn’t make it to Germany have been the first victims of the “epuration”, the tough and extremely violent political cleansing that took place in France in the aftermath of the liberation. Let’s mention the 76 Miliciens shot by a fire squad in the Grand Bornand on August 24th, 44 after a mockery of judgment. Two names only will be quoted here: Andre Lacroix and Jean Pinaud. They were both 17 years old.

To conclude those dark pages, let’s quote a French resistant, a tough fighter who killed quite a number of German soldiers and French collaborationists between 1942 and 1944:

“In absolute value, the men of action in all camps are the same sort of men. I fought toughly the Milice but, if I hate them, I also have more regard for them than for the cowards and the liars whomsoever they are”.

Soldiers of Milice francaise on parade in 1944 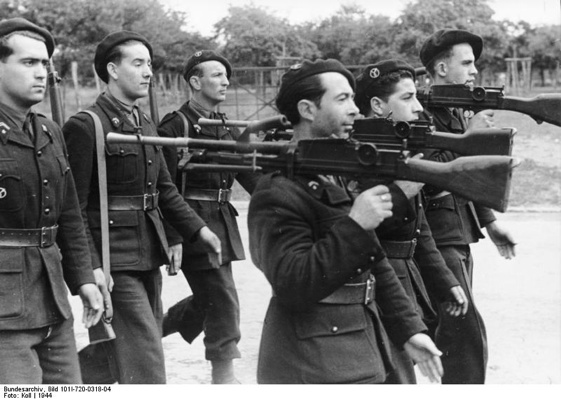 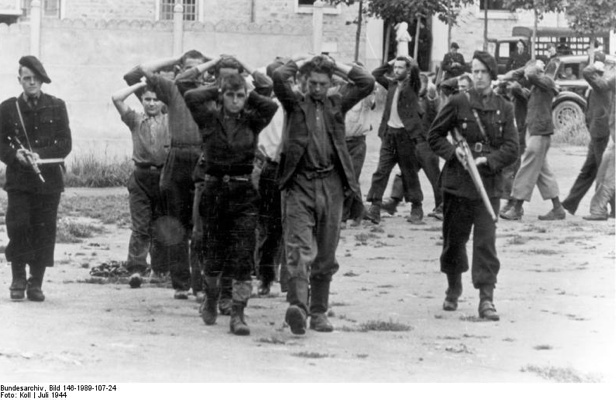