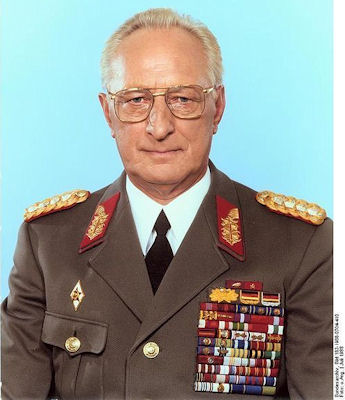 26 Jan 1920: Born in Lauban/Silesia (today Luban, Poland).
1934-1940: Apprenticeship, machine fitter.
15 Nov 1940-15 July 1941: Soldat in the Wehrmacht. After completion of training, Keßler was assigned to the 134th Infantry Division as an assistant machine gunner. Commanded by Generalleutnant Conrad von Cochenhausen, the division took part in the invasion of the Soviet Union in June 1941 under Army Group Center.
15 July 1941: Deserted to the Russians while on a combat patrol in the area of Bobruisk, a German bridgehead on the east bank of the Berezina.
1941-1945: Prisoner of war in Soviet captivity. After detention at Prisoner of War Camp 27 at Krasnogorsk (where he made contact with the KPD), Keßler and fellow prisoner Franz Gold, a future Generalleutnant in the Ministry for State Security, were transferred to the Spaso-Zavodsk prisoner of war camp near Karaganda in the Kazakh Soviet Socialist Republic [Kazakhstan]. Prompted by Walter Ulbricht’s visit to the camp at the end of 1941, Keßler and Gold volunteered for a five month-long training course at the new Antifascist School at Gorki. Afterwards, both returned to Krasnogorsk for further antifascist activities. Shortly thereafter, Keßler was recruited for propaganda actions at the front as a member of the 7th Department of the Political Main Administration of the Red Army. In December 1942, Keßler and Gold engaged in their first propaganda “front action” against the encircled German defenders of Velikie Luki.
1943-1945: Member of the National Committee “Free Germany” (NKFD). After taking part in the preparation and establishment of the NKFD at Krasnogorsk in July 1943 (during which he avowed his aim of working with the German youth), Keßler resumed his propaganda activities, this time on the Bryansk front. Mentored by Walter Ulbricht in the winter of 1943, Keßler was reassigned from front duty to the headquarters of the NKFD at Lunevo where he worked on the editorial staff of the “Free Germany” radio station and made numerous broadcasts. From Sep 1944-Nov 1944, Keßler completed his training as a party functionary for youth questions at Antifascist School 12.
1945: Joined the German Communist Party (KPD).
1945-1946: Leader of the Main Youth Committee of Greater Berlin.
1946: Joined the German Socialist Unity Party (SED).
1946-1989: Member of the Central Committee of the SED.
1946-1948: Chairman of the Free German Youth (FDJ) of Berlin.
1947: Married Ruth Schmidt in East Berlin.
1948-1950: Secretary of the Central Council of the FDJ.
1950-17 Mar 1990: Member of the Volkskammer or Parliament of the German Democratic Republic.
1 Oct 1950-30 June 1952: Leader of the Air Police Main Administration (granted the rank of Generalinspekteur on 1 Nov 1950).
1 Sep 1952-31 Aug 1955: Chief of the People’s Police-Air; renamed the Administration of the Aero Clubs on 23 Sep 1953 (promoted to Generalmajor on 1 Oct 1952).
Sep 1955-Oct 1956: Attended the Military Academy of the Soviet Air Force in Moscow.
1 Sep 1956-15 Mar 1967: Deputy Minister for National Defense and Chief of the Air Force/Air Defense (promoted to Generalleutnant on 1 Oct 1959; promoted to Generaloberst on 1 Mar 1966).
1957-1989: Member (Chairman from 1985) of the Collegium of the Ministry for National Defense.
15 Mar 1967-10 Jan 1979: Deputy Minister for National Defense and Chief of the Main Staff; from 1970, also Deputy of the Commander-in-Chief of the United Forces of the Warsaw Pact for the Nationale Volksarmee (NVA). (In January 1971, Keßler nearly lost his life when he was seriously injured in a traffic accident. He underwent several operations and spent the next eight months hospitalized. Despite a lengthy rehabilitation, Keßler never regained his full health. Generalleutnant Dipl.-Mil. Fritz Strelitz, the Deputy Chief of the Main Staff for Operative Questions and Chief of the Operative Administration, represented Keßler during his absence. In 1979, Strelitz succeeded his boss as Deputy Minister for National Defense and Chief of the Main Staff.)
10 Jan 1979-3 Dec 1985: Deputy Minister for National Defense and Chief of the Main Political Administration.
3 Dec 1985-17 November 1989: Minister for National Defense and Member of the Committee of Defense Ministers of the Warsaw Pact (promoted to Armeegeneral on 3 Dec 1985).
1986-1989: Member of the Politburo of the Central Committee of the SED.
1987-1989: Member of the National Defense Council of the German Democratic Republic.
17 Nov 1989: Resigned his post as Minister for National Defense and succeeded by Admiral Theodor Hoffmann; remained in the ministry without specific duties.
15 Dec 1989: Retired from active military service.
16 Sep 1993: Convicted and sentenced by a Berlin court to seven-and-a-half years’ imprisonment for indirect complicity in manslaughter in connection with the alleged “shoot to kill” orders given to East German border guards and the implementation of other lethal inter-German border fortification methods. Keßler’s former deputy, Generaloberst Streletz, received a five-and-a-half year prison sentence while former Suhl district SED secretary Hans Albrecht was given a sentence of four-and-a-half years’ imprisonment (later increased by seven months).
1996: Publication of Keßler’s memoirs Zur Sache und zur Person. Erinnerungen.
29 Oct 1998: Released on probation for health reasons.