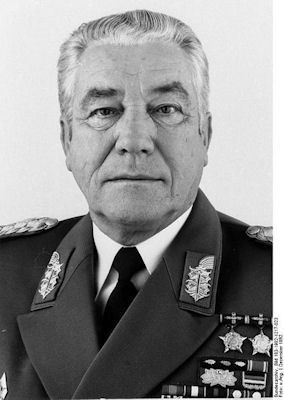 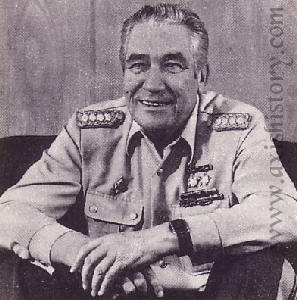 * The first awards of the Scharnhorst Order were rendered on 1 March 1966 by the First Secretary of the SED, Walter Ulbricht. Hoffmann was the first recipient of the new order.

Hoffmann’s major decorations were derived from information and a color photograph depicting his final, abbreviated Interimsspange (ribbon bar for everyday wear) as well as a color photograph of an earlier, complete Interimsspange in the Feder and Feder work cited below. Hoffmann’s earlier Interimsspange pictured in this book consists of 48 ribbons. In addition to those previously listed, the following ribbons in the photograph have been provisionally identified by the editor of this biographical profile:

Although instituted on 25 March 1982, the rank of Marschall der Deutschen Demokratischen Republik (DDR) was never bestowed. As the senior serving general of the Nationale Volksarmee, Hoffmann would have been the prime candidate for promotion to this rank in the event of war.