Cufftitles of the Nationale Volksarmee

The tradition of issuing cufftitles to certain units was one of the many traditions the Nationale Volksarmee continued from the Wehrmacht, below you can find information of the different cufftitles used by the NVA and the Grenztruppen.

Wachregiment der Stadtkommandantur Berlin, one of the two guards regiments in the NVA, was issued the cufftitle "NVA-Wachregiment" 28 June 1962. It continued to use this cufftitle until 7 Oct 1980 when it received the honortitle Wachregiment Friedrich Engels and was given a cufftitle with the same name which was in use until the fall of the Berlin Wall in 1989.

The regiment was stationed in the Kaserne am Kupfergraben, the same barracks as Friedrich Engels had done his service in 12 Fuss-Kompagnie, Garde FussArtillerie Regiment 1841-42. Friedrich Engels (1820-1895) is most famous for his collaborations with Karl Marx, including the "Communist Manifesto".

Wachregiment Friedrich Engels taking part in a changing of the guard at the Neue Wache, site of the Memorial to the Victims of Fascism and Militarism in Berlin, 1987.
The Unteroffizier who is posting the guard is wearing a "Winkel für Soldaten und Unteroffiziere auf Zeit" on his right sleeve. 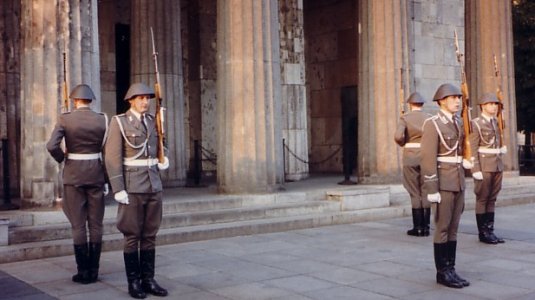 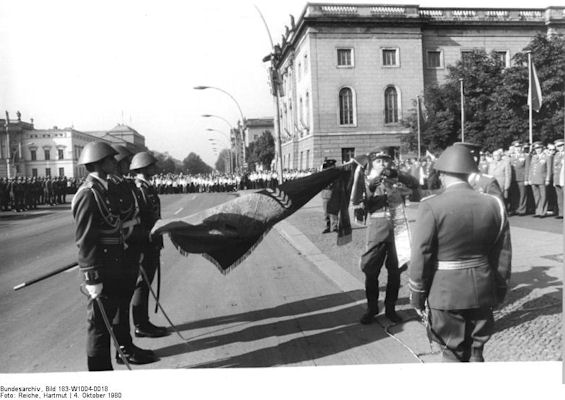 The other guards regiment, Wachregiment 2 Hugo Eberlein, wore the "NVA-Wachregiment" cufftitle until it was absorbed by the Bundeswehr in 1990. It was named for Hugo Eberlein (1887-1944), one of the earlier leading German communists and cofounder of the Kommunistische Partei Deutschlands (KPD), he left for the USSR in 1933 and was ironically arrested by the Soviet police during the purges and died in prison.

The members of the Erich-Weinert-Ensemble wore a cufftitle with the same name. This ensemble was named after the composer and writer Erich Weinert (1890-1953).