The SS-Sonderkommando Dirlewanger (also known as SS-Sonderbataillon Dirlewanger and Sonderkommando der Waffen-SS Lublin) was formed from Wilddiebkommando Orienburg, a small anti-partisan units made up of poachers, SS disciplinary prisoners and Osttruppen, that was trained by SS-Totenkopf-Standarte 5. The strength was later increased with convicts (military and civilian) and volunteers from the concentration camps (mainly political prisoners).
It was stationed in Poland but in January SS-Obergruppenführer Friedrich-Wilhelm Krüge, Höhere SS und Polizeiführer Ost, threatened "[Unless] this bunch of criminals disappears from the Government General within a week, I will go myself and lock them up." (1) and the unit was transferred to Belorussia soon after.
It was upgraded to SS-Regiment Dirlewanger in August 1944.

In 1941 I organized a ‘poachers’ regiment’ under Dirlewanger ... a good Swabian fellow, wounded ten times, a real character - bit of an oddity, I suppose. I obtained permission from the Führer to collect from every prison in Germany all the poachers who had used firearms and not, of course, traps, in their poaching days - about 2.000 in all. Alas, only 400 of these ‘upstanding and worthy characters’ remain today. I have kept replenishing this regiment with people on SS probation, for in the SS we really have far too strict a system of justice ... When these did not suffice, I said to Dirlewanger ... 'Now, why not look for suitable candidates among the villains, the real criminals, in the concentration camps?' ... The atmosphere in the regiment is often somewhat medieval in the use of corporal punishment and so on ... if someone pulls a face when asked whether we will win the war or not he will slump down from the table ... dead, because the others will have shot him out of hand'. (2)

Heinrich Himmler wrote an internal memo in February 1944 on the matter of jurisdiction:

The Einsatz-Battalion Dirlewanger consists of German men who have been previously convicted of poaching. This nucleus is considered to be good and even very good: concentration camp inmates who are suitable for the assignment; former members of the SS, who, after having served their time, are assigned for rehabilitation purposes to front service.

1. In combat the commander has jurisdiction over life and death of all members of these battalions, which consist of these different components.

2. The rehabilitation of the former poachers will be undertaken, without participation of the SS Court Main Office, through SS Lieutenant General Berger and SS Major General Nebe in the Reich Security Main Office through the Reich Ministry of Justice.

The accomplished rehabilitation will be reported by SS Lieutenant General Berger to the SS Court Main Office.

3. The commander of the battalion, SS Lieutenant Colonel Dirlewanger, will have jurisdiction over life and death of the concentration camp inmates in rest area and field garrison.

4. The poachers will be under SS jurisdiction after their rehabilitation. As long as they have not been rehabilitated, the commander has also the power over life and death in rest area and field garrison.

5. Former SS men, assigned for rehabilitation, are under SS jurisdiction in rest area and field garrison.

This unit took part in numerous atrocities in Poland and the USSR.

On 22 March 1943 the village of Khatyn in Belarus (not to be confused with Katyn in Poland where Poles were killed by the Soviet NKVD) was burned down and 149 civilians killed by soldiers from SS-Sonderkommando Dirlewanger and the attached Schutzmannschaft Bataillon 118.

The 1985 Soviet movie "Idi i smotri" ("Come and See") directed by Elem Klimov deals with the massacre at Khatyn.
The 2009 video game "Velvet Assassin" developed by Replay Studios feature soldiers from this unit.

Memorial to the victims of the Khatyn massacre 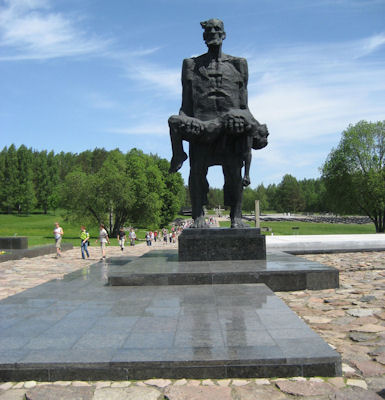